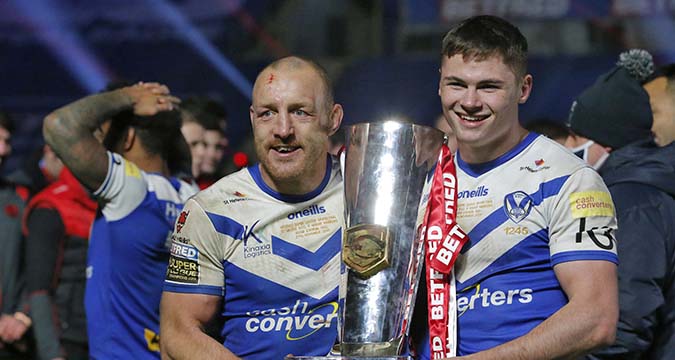 He scored the most iconic try in Super League Grand Final history.

And humble Jack Welsby, as you might suspect, is still struggling to come to terms with a moment that will define his career.

Welsby wrote his name into Rugby League folklore as he scored a try after the hooter to secure St Helens Grand Final glory in the most unimaginable way possible.

“The night before, everyone pictures what they want to happen in the game, they dream about their moment, but what actually happened is beyond anyone’s wildest imagination.

“I thought Tommy (Makinson) had got it, I was just running aimlessly, in truth. Then it hit the post and dropped down and I thought ‘oh my god, that’s perfect’. I had a really good angle with where I was running, I could see exactly where the ball was bouncing, where I think their guy had to re-adjust his feet and couldn’t see it as well.

“To be fair, I wasn’t completely sure I was onside or put the ball down. But I was confident I was there or thereabouts. It’s all a blur now, I remember James Bentley being the first to jump on me and then I can’t remember. The only thing I remember after that is seeing Tommy Leuluai running back with his head in his hands and thinking ‘oh my god, I’ve got a chance here’.”

The moment has already drawn comparisons to the famous ‘Wide To West’ try.

“I’ve seen a lot of people saying that. I think mine was a bit more flukey! It’s just unbelievable; I really don’t have the words to explain it.”

The dramatic ending has seen Welsby, at just 19 years of age, already solidify himself as a St Helens legend.

But he insists he is hungry for more glory after producing the most dramatic finish to a game in history.

“I think that’s the hardest part of the game. When you reach that point; I’ve just achieved something I’ve always dreamed of doing as a kid, winning a Grand Final and having a ring on my finger and I think it’s really hard to reset and prepare yourself to go around and do it all again.

“But that’s what the greatest players do. You look at James Roby, Friday was his ninth Grand Final and his fifth win, or something like that. That’s something every young player should strive for.”

If Saints are to remain at the top, more battles with Wigan will be on the horizon, a challenge the youngster, who grew up as a Warriors fan, is relishing.

“It was set up nicely with Jammer and Lockers retiring on the biggest stage, they’re two legends of the game. Now we’ve seen some brilliant signings from both clubs. We’ve signed three NRL players and Wigan have gone and signed Bateman back, it’s set up to be massive.

“And you’ve got the Academy lads coming through, That’s what both clubs have built their success off. James Bentley is ridiculous, every single week since lockdown. He’s taking that role and changing it, how many second-rowers would make 69 tackles like that in any game? And it’s the same on the Wigan side, you see when Morgan Smithies gets to play those minutes that he makes 70 tackles and you’ve Ollie Partington coming through too.

There are going to be a lot of battles over the years.”

For now, Welsby is going to let the moment sink in.

“My phone has been going insane all weekend. I didn’t go on it much the night we won, but I went on it Saturday and it’s just been incredible how many lovely messages I’ve been getting. My phone can’t cope though, it’s just kept freezing and crashing with the number of notifications I’ve been getting, I’ve had to turn them off.”

Welsby is unlikely to ever need to buy a drink again in his life, but he added: “I don’t think I’ll be able to drink again after this weekend, to be fair!”