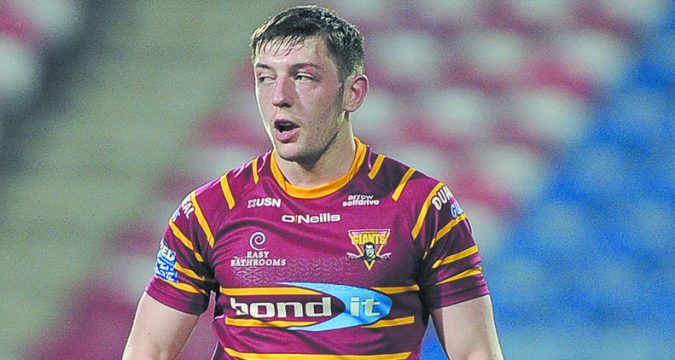 Jake Wardle has turned down interest from Melbourne Storm to sign a new three-year deal with Huddersfield.

The centre was on the radar of the NRL club, but has instead penned a new deal with his hometown club that will keep him in West Yorkshire until the end of 2023.

Wardle has emerged as one of Super League’s brightest young players and was the matchwinner when the Giants shocked Super League champions St Helens earlier in the year, with the 21-year-old scoring a spectacular long-range effort.

That hadn’t gone unnoticed by Melbourne, whose recruitment manager Paul Bunn cast his eye over Wardle during a UK visit earlier in the year.

But now Wardle has committed his long-term future to the club and told League Express: “I’m very pleased to have secured my future with the Giants for the next three years. I can’t wait to get back training and playing.

“There was an interest from Melbourne, and to be linked with one of the best teams in the world is very humbling. However, it probably wasn’t the right time for me to move away and I am happy at the Giants and with the culture we’ve built over the past couple of seasons, which I want to be a part of going forward.

“My goals as an individual are to be consistent and do my bit for the team and then try and make the leap to the England first-team setup. The goals for us as a squad are to be up there competing with the top teams and try and win some silverware, which hopefully we can achieve with the foundations we’ve put in place this year.”

Wardle joins four other Academy talents in committing to the club, with the Senior twins, Innes and Louis, Sam Hewitt and Jon Luke Kirby all signing new contracts in recent weeks.

The club plans to continue its retention drive moving forward, with Jake’s brother, Joe, Aaron Murphy, Paul Clough and Leroy Cudjoe among those off-contract at the end of the season.