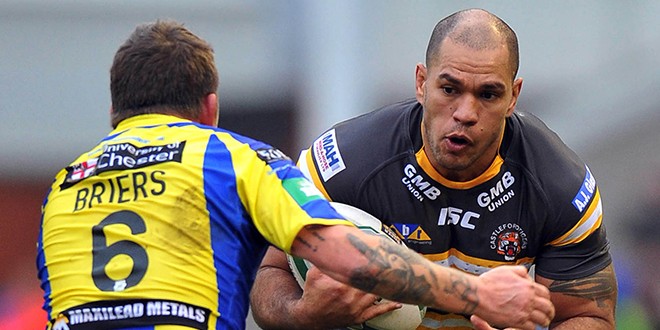 Castleford centre Jake Webster is set to make his first Super League appearance in almost a year this weekend, after Daryl Powell confirmed he will feature for the Tigers against Hull FC.

Webster hasn’t featured in the amber and black of Castleford since suffering a knee injury against former club Hull KR last match – and has subsequently been plagued with more knee and shoulder troubles.

However, after featuring for the Tigers’ dual-registration club York last weekend, Powell confirmed Webster will be in the 19-man squad – and could even play a role for the side who are undefeated in 2014.

“He went well last Sunday, and played around 70 minutes. It’s great to have him on board – he’s a quality player with loads of experience and I’m really pleased to have him back,” Powell claimed.

“He’ll add even more competition for places amongst the backs, and it puts a little bit of pressure on the centres who are there already. He’ll be with us this weekend, and he’ll be in the squad. I’ll make a decision on Friday as to what we’re goiing to do with him, but he’s a strong chance of playing this weekend.”

The return of Webster will be welcome news for Powell, who confirmed at the club’s pre-match press conference that Kirk Dixon is set for an extended lay-off, after suffering a broken jaw at the hands of a Michael McIlorum challenge. That will likely mean a return for Richard Owen – who was dropped after scoring a hat-trick during the win over Hull KR, although Powell also claimed young James Clare could be in the frame to play, too.

“It looks like six weeks for Kirk, he’s had his operation but is in really good spirits.

“We’ve got Richard Owen and James Clare available – Richard was very good against Hull KR a couple of weeks ago though so he’s an obvious replacement.”

Powell also welcomed the three-match ban McIlorum had imposed on him for that challenge on Dixon, stating: “I think it was a careless tackle from Micky – they weren’t going well at the time and he’s gone after Kirk pretty heavily and he’s obviously hit him on the jaw. It was a little bit reckless, and they’re not the sort of tackles you want to be seeing.”