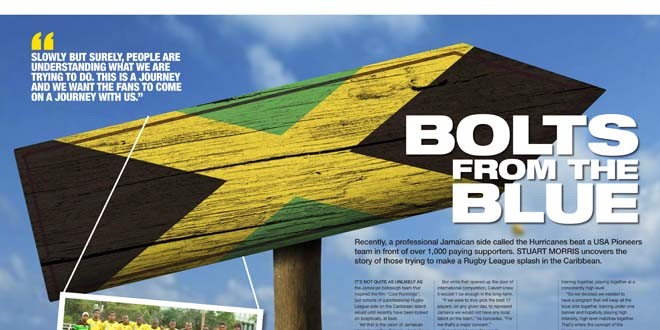 As they prepare to face USA and Canada in the Firehouse Subs 2017 Rugby League World Cup Qualifiers (Americas) in early December, Jamaica head coach Romeo Monteith has confirmed that local talents, Marvin Thompson and Ryan Grant, will be the half backs tasked with engineering glory.

Jamaica has been steadily building its domestic rugby league programme since 2005 and the sport has found root in both high schools, universities and colleges in and around the capital city Kingston.

Thompson and Grant are formerly of Calabar High School and have been playmakers and leaders for the Reggae Warriors since 2011.

“We have absolute faith in our sons of the soil,” said Monteith. “Both Marvin and Ryan have been a steady part of the national setup and we see it as vital to our development to reward players with their type of commitment and consistency.

“Both are natural leaders and it is important that local players like them are given opportunities to play their natural positions, regardless of the opposition we are facing or the composition of our team.”

Both have received full scholarships to universities in Jamaica. Grant has competed a four year degree at GC Foster College, the English-speaking Caribbean ‘s only sport college, while Thompson is in his second year on scholarship at the University of The West Indies.

Monteith believes that the sport has a bright future on the island despite the difficulties faced with facilities and funding.

“We are developing a brand of rugby league that is distinctly the Jamaican way, there is a lot of athleticism and individual skills and we are trying to increase coaching knowledge and game sense at all levels so that the standard of the sport will continue to improve,” he noted.

“Our player pool is constantly increasing and if rugby league continues its rapid rise internationally and provides a pathway for countries such as Jamaica to play more matches and in major tournaments, the sport will only get bigger and bigger.

“Guys such as Marvin and Ryan can mature into true sporting icons in the Jamaican sporting landscape and become heroes to the next generation of Jamaican rugby league players.”

Monteith confirmed that players of heritage will come into contention as the squad aim to qualify for the World Cup for the first time.

“Jamaica has a strong core of English-born eligible players, however, many of them are wingers and centres, there is a real scarcity in the halves and this is even further reason to nurture and give opportunities to those produced domestically.

“We have been focussed over the past few years to improve our locals to ensure that at all times we have players to compete effectively.”