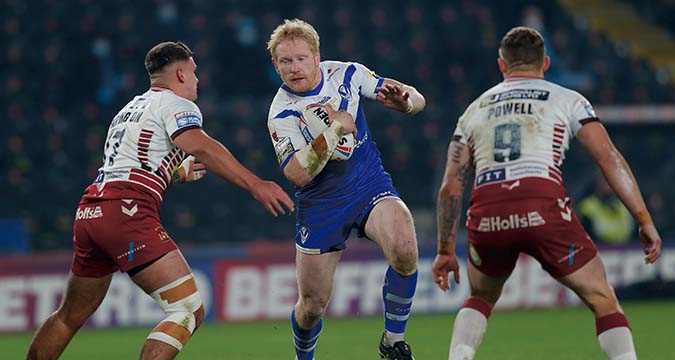 The 2020 Grand Final was already a contender for being the most memorable Grand Final of all time because of the venue and the lack of a live crowd.

The mere fact that the game was being played at Hull FC’s KCOM Stadium, not Old Trafford, without the usual crowd of more than 60,0000, made it unique.

Those were the key facts before that amazing ending.

From now on, it won’t be Hull or the lack of a crowd that this game will be most remembered for.

Now, for as long as Rugby League is played, it will be remembered for that astonishing try by Jack Welsby in the final seconds of the game and for the St Helens players’ pure emotion after Welsby touched down.

The joyful reaction of the Saints players began before they had realised that the decision had been referred by the referee Chris Kendall to the video-referee Ben Thaler. Fortunately for them, Kendall recommended that the try should be awarded and Thaler, after spending what must have seemed an eternity, finally decided that Welsby hadn’t been offside when he followed up Tommy Makinson’s failed drop-goal attempt.

I can’t imagine what their reaction would have been if Thaler had turned the try down.

But it was interesting to see that the player who didn’t celebrate until the try was finally given was James Graham.

Graham’s last title triumph was with St Helens in 2006, when they defeated Hull FC at Old Trafford. Since then he had played in seven Grand Finals, including five with St Helens from 2007 to 2011, and two with Canterbury Bulldogs in 2012 and 2017, losing them all.

So Graham had plenty of reasons to be ultra cautious, not counting his chickens until they were hatched.

But the moment that Thaler pressed the ‘TRY’ button, Graham suddenly realised that he now ends his career as a winner, with his second Grand Final winners’ ring.

Not surprisingly, he was almost delirious with joy, as he ran around hugging his team-mates and almost anyone else in sight, of which, because of Covid, there were not many.

You would have needed a heart of stone not to feel happiness for him, even if you felt sorry for Sean O’Loughlin, the Wigan captain who was playing his last game.

Obviously it would have been good to see both players going out as winners in their final games. But that was impossible.

But given Graham’s losing record in Grand Finals, which contrasts with Sean’s largely winning record, I think there would probably be more neutrals in St Helens’ camp than in Wigan’s.

And of course it wasn’t only Graham who was playing his last game for St Helens.

For Wigan, Joe Burgess, who bravely played on after suffering a broken jaw, was also playing his last game before he joins Salford Red Devils next season, while we’re still not sure about Thomas Leuluai, although it was notable that young Harry Smith didn’t make the matchday 17, although he looks ready to be a regular in the Wigan side next season, when he will be 21 years old. His time has surely come.

Ben Flower’s contract at Wigan is now completed and he should have been joining Toronto Wolfpack, so his future is uncertain. He was absent on Friday night with a hamstring injury he suffered in the semi-final against Hull FC.

But in many respects the most significant non-selection was George Burgess, who signed for Wigan with a fanfare at the start of the season, but has struggled, partly because of injury problems, to make a significant impact at the club.

For Wigan the Grand Final was a ‘what if’ sort of match.

What if Zak Hardaker had managed to get the ball down for a try in the first half?

What if Morgan Smithies hadn’t conceded a penalty with a shoulder charge on Lachlan Coote just before half-time, which allowed Coote to kick St Helens into the lead?

What if Hardaker’s attempted conversion of Jake Bibby’s try had hit the crossbar and gone over, instead of rebounding back?

What if referee Chris Kendall hadn’t rather harshly called out Jackson Hastings’ tackle on Theo Fages for a penalty, allowing Coote to level the scores?

What if Hardaker’s penalty attempt inside the last minute had been only slightly better directed and had been strong enough to go dead, even if it hadn’t gone between the posts?

What if Wigan, instead of kicking at goal, had kicked into touch and gone for a last-minute field goal?

What if Tommy Makinson’s field-goal attempt had missed the post and gone dead at the end of the game?

And what if the video-referee had called Jack Welsby offside as he set off to chase Makinson’s kick, ultimately scoring the decisive try.

That’s a total of eight ‘what ifs’.

If even one of them had worked out, Wigan might have been the winners.

That’s how close, and how thrilling, this game was.