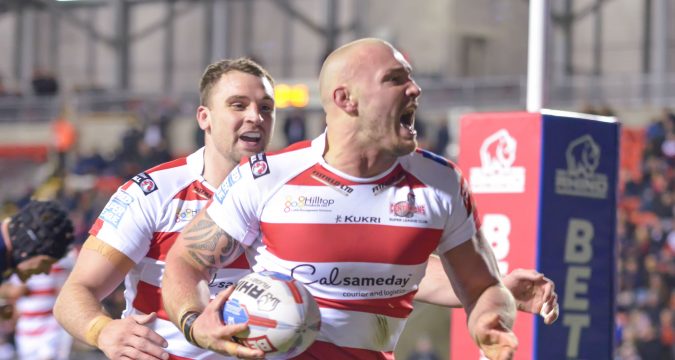 Leigh prop Jamie Acton is facing another long suspension after being handed a Grade E charge for intentional strike of an elbow.

The Centurions forward was sent-off in the opening ten minutes of Leigh’s win over Batley last week following a challenge on Bulldogs halfback Tom Hemingway, who was stretchered from the field and sent to hospital following the incident.

Acton has now been handed a charge that would usually result in a four to eight-match suspension, which would see him miss a fair chunk of Leigh’s remaining games this year.

His latest charge comes just over 12 months since he was caught up in another high-profile disciplinary case after he was handed a Grade F charge for lifting Greg Bird from the floor when the Dragons player appeared to be unconscious after a collision with Leigh halfback Ben Reynolds.

He was subsequently banned for nine matches, with the suspension extended to a four-month period ban on appeal.

If found guilty, it will be the twelfth time the prop has been suspended in just over three years.

Elsewhere, Toulouse’s Rhys Curran has been cited for a Grade D dangerous throw which could see the influential back-rower miss next week’s pivotal top-four clash with Halifax along with the start of the Qualifiers, while Featherstone’s Matty Wildie has been handed a one-match penalty notice for foul and abusive language towards a match official.

In League 1, Whitehaven’s Ellis Gillam has been charged for a high-tackle, which carries a one-match penalty notice, while London Skolars’ Mike Greenhalgh has been cited for a Grade E dangerous throw.