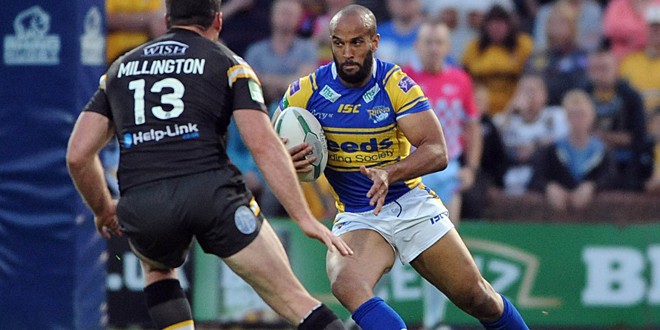 The 32-year-old sustained the painful injury after just 15 minutes but continued until half-time, when physios intervened and prevented the England international from returning to the field.

“We all know Jonesy is a warrior but he bust his bicep in the first 15 minutes and carried on,” McDermott said.

“Our physio said at half-time if I left him on it would be a rupture and a six month job, so we kept him off for the second half, but it was a huge effort.”

The Rhinos missed a late drop-goal and conceded a 78th-minute Tommy Makinson try to lose their unbeaten record in Super League this year, but McDermott was typically gracious in defeat.

“I thought Saints deserved their win,” he said.

“I didn’t think there was much in it and I wouldn’t have felt ashamed if we had won it. It was a fair result. It was a tough game and I thought Saints defended extremely well.

“Momentum is a club thing and they clearly had some momentum. Yes they were missing some people, but I just knew the kids they brought in would do a good job.”

Meanwhile, Rhinos chief executive Gary Hetherington has refuted claims that Ryan Bailey was sent on dual-registration duty to Hunslet on Sunday as a punishment for breaching disciplinary code.

The 29-year-old prop missed a training session in the build up to the London game a fortnight ago and was dropped as a result. But Hetherington insists that being sent to the Hawks was simply a way to guarantee game time.

“It is not a disciplinary issue, being sent to Hunslet,” he said.

“He was not selected last week and we have got pretty much a fully-fit squad. We have been blessed so far, but we know that can change in an instant.

“If we have everybody fit we need them to be playing and it is important Ryan gets some game time. Ryan is still part of the squad, he is back in full training and in contention to be selected. All our players are available to play for Hunslet if required – that is part and parcel of our arrangement.”

Hetherington also confirmed that Luke Briscoe has returned to Headingley following a loan spell at Wakefield and said the club will review the situation with Liam Sutcliffe, who is coming to the end of a four-week loan at Bradford, later this week.