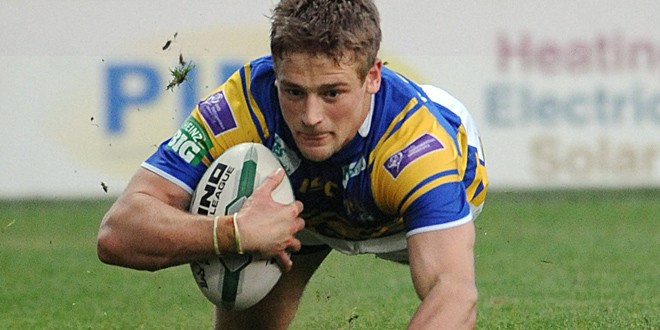 Keinhorst, 23, and Briscoe, 19, have linked up with Trinity in a bid to land themselves regular first-team action as the Wildcats look to rebuild following a host of off-season departures.

Keinhorst made nine appearances for the Rhinos in Super League last season, scoring three tries, but Briscoe, the younger brother of England winger and new Leeds signing Tom, is yet to make his top-flight debut.

However, Keinhorst told League Express that he expects Briscoe junior to have a big impact at Belle Vue.

“He’s really versatile and will play wherever he’s asked to – especially along the backline, but he could easily fill in at second-row or loose forward too.”

Keinhorst has been used sparingly by the Rhinos over the last two seasons, but enjoyed a fruitful dual-registration spell in the Championship with Hunslet Hawks in 2013. He is now relishing the opportunity of nailing down a regular first-team spot in Super League.

He continued: “I have the platform and now it’s up to me to take the chance.

“I want to get regular first-team action, which I’ve not managed at Leeds, so hopefully I can start the season well, hold down a centre spot and make the jersey my own.”

Keinhorst and Briscoe follow Richard Moore and Paul McShane from Headingley to Belle Vue, and the German international says he has been impressed with his team-mates, both old and new, during his first couple of training sessions.

“Everyone has made us feel very welcome, they seem like a good bunch of blokes and I’ve been impressed with the skill level,” he added.

“It always helps when there are familiar faces; it can be quite daunting going to a new place, but the lads have been great.

“I’m not setting too many goals – I just want to take each week as it comes and hopefully impress Richard Agar and everyone else at the club. I still need to develop and improve as a player, and if I do that and start performing consistently, the tries will take care of themselves.”