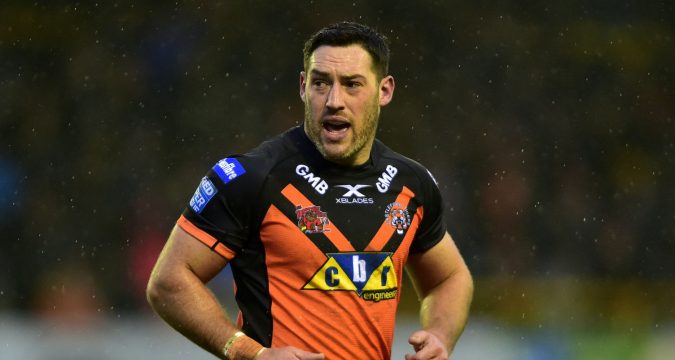 Joe Wardle admits the break for the World Club Challenge has been perfect timing for both himself and his Castleford team-mates, as he eyes up his first competitive game for nearly six months on Saturday.

Wardle is hoping to make his Tigers debut in the clash with Hull this weekend, having missed their opening two fixtures due to a knee injury which admits left him ‘devastated’.

However, he is now fully-fit – and he told League Express he can’t wait to get started in a Castleford shirt.

He said: “September was the last time I played competitively – in the final round of the NRL season for Newcastle Knights.

“It’s been a while, and I’m going to be rusty for a little bit but I’m just eager to get out there and get my Castleford career going now.

“Everything is all good; I could have played against Widnes at a push but with the fields being boggy and things like that, I think me and Greg (Eden) were a risk. But I’m back in full training and I can’t wait to get going.”

Wardle was due to play in Castleford’s season-opener at St Helens before suffering the injury – and he revealed just how close to kick-off he was ruled out.

“It was literally in the final couple of minutes of training the day before the Saints game – I was down to play,” he said.

“I was devastated to be honest. But I knew my time would come and hopefully that starts this weekend. It was a bonus having a week off with everyone down in Australia, and I think it couldn’t have come at a better time for me and the team.

“We’ve had a big week of focussing on where we need to improve, and we’re looking forward to getting back out there. We know we’re not firing on all cylinders and the boys want to start going on a run.”

Wardle has spent his career between playing centre and second row – but he insists he knows where he wants his long-term future to be.

“People don’t realise that I’ve played there for a good three years now, but if someone like Jake (Webster) or Michael Shenton can’t play, I can dip in at centre. I think playing back-row suits my game more because I love getting stuck in, and in some ways I’m a little bit wasted in the centres.”