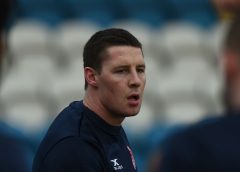 Tomkins had been referred by the RFL’s Match Review Panel for punching Zak Hardaker in the 78th minute of Saturday’s Betfred Super League game with Wigan Warriors, after Hardaker headbutted Sam Tomkins, the Dragons’ fullback.

Hardaker has since been suspended for two matches for his offence.

Joel Tomkins entered a guilty plea, but challenged the Match Review Panel’s grading of the offence. The tribunal, however, found the ‘D’ grade to be correct.

Castleford Tigers’ George Griffin will serve a one-match ban after unsuccessfully challenging the Review Panel’s verdict of Grade B ‘dangerous contact’ with an opponent in the fourth minute of Castleford’s’ game with Leeds Rhinos.

Both players were also fined £500.

The following players have accepted penalty notices imposed by the Match Review Panel.