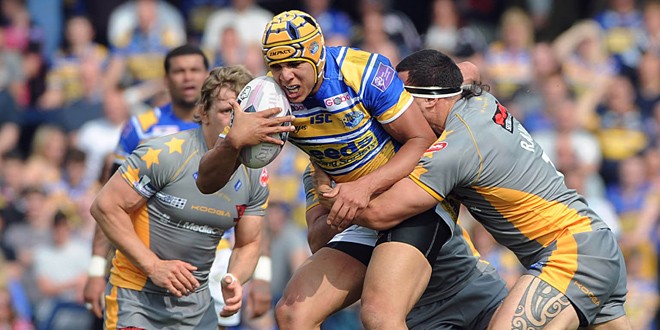 Leeds Rhinos fullback or winger Ben Jones-Bishop is to leave Headingley at the end of the season.

Jones-Bishop, 25, came through the Rhinos Academy ranks and took his try total to 53 in 76 games with his two tries in Thursday night’s win over Castleford Tigers. He made his debut in 2008 and played in the 2011 and 2012 Grand Final wins as well as winning the World Club Challenge in 2012.

Commenting on the announcement Chief Executive Gary Hetherington said, “It is always disappointing to lose a local player like Ben who has come through our Academy and made his mark in the first team, but we fully understand his decision to turn down the offer of a longer term contract last season to leave his options open.

“Ben was always going to be a valuable member of this year’s squad and he will continue to be so until the end of the season. He will leave for a club of his choice as a good friend of the Rhinos and with everyone’s best wishes,” added Hetherington.

The England Knights international commented, “I have been at the Rhinos for seven years now so it will be sad for me to leave and it was a big decision to reject the offer of a longer contract last season, but I wanted to keep my options open until now.

“I will miss the Rhinos players and fans but they can be assured I want to finish my time here on a high and I will be trying my best to contribute to that success in any way I can,” added Jones-Bishop.

Head Coach Brian McDermott added, “Ben has shown what a complete professional he is this season with his attitude and commitment to the team through what has obviously been a frustrating period for him personally. Every day in training he is helping to set the standard that we aspire to, whether he is involved on the gameday or not and I appreciate that, as do his team mates. He remains one of the best young English players in our competition and he has shown, when called upon this season, as he did at Castleford, that he is a clinical finisher of chances. It will be sad to see him go at the end of the season but he will go with all our best wishes and I know he will have a big part still to play in this season for the Rhinos.”