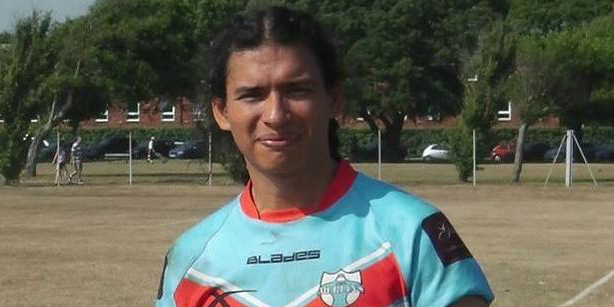 A man who has become a viral hit online after being the subject of xenophobic abuse plays an important role in Manchester’s Rugby League community.

Millions of people have seen Juan Jasso suffer abuse while on a Manchester tram after a video emerged online of three youths verbally abusing him and throwing beer at him.

Two teenagers, aged 16 and 18, have been bailed by police, and a 20-year-old man who was also held remains in custody for questioning after the incident was caught on camera.

Mr Jasso, A US Army veteran who originally came to England in 1998, plays a prominent role at amateur side Manchester Rangers, where he is player-coach.

His life has momentarily changed, with messages of support flooding in from friends, family and strangers, who have all supported his heroics after asking two youths to watch their language, which then escalated into a more serious situation.

“Somebody told me it’s had over four million views. I’ve had calls and messages from friends all over the world, from Latin America, the States, Spain, Dubai, everywhere you can think of.

“It’s surreal because I’m not used to that sort of thing. I’m used to doing my job, getting on with it and being pleased that I’ve done a good job without getting any praise for it or any accolades. That’s how I try to live myself.

“Everyone has been extremely supportive which is really nice, but I just want to kind of get on my life now and do what I need to do.”

As for his Rugby League connection, Mr Jasso only took the game up in 2005, after originally been introduced to the 15-man game when he first arrived in the country.

“I went to Leeds Met to do an undergraduate degree in 2009,” he explained.

“When I found out that they had a Rugby League club I thought I’d give it a go, and I fell in love with it.

“I love the speed. I play down the wing and I love that the ball actually comes out to you. Even if you don’t get the ball you’re still contributing even if you’re not in direct contact with the ball.”

However, his first experience of rugby wasn’t pleasant.

“The first game I played in I broke a guy’s leg. Not on purpose, I was just going for the ball, but I snapped the guy’s fibula and tibia and he was out cold. He was in hospital for ages because he had to have part of the bone removed. He never played again, I felt really bad for the guy.”

However, Mr Jasso, who is currently doing his masters in strength and conditioning at the University of Salford, was not fazed by the incident and has aspirations to work in the professional game.

“I’d like to be involved with a professional club again in any capacity,” he said.

“I have a good background to lend itself to different positions to be beneficial to a club. I was fortunate enough to work under Phil Jones at London with their scholarship program, and I learned a tonne of stuff doing that.”