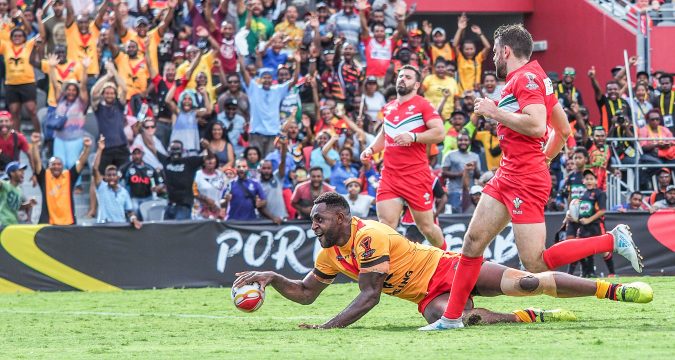 Wales head coach John Kear is looking for improvements after his side’s 50-6 defeat to Papua New Guinea in their opening match of Rugby League World Cup 2017.

After trailing 26-0 at the interval in humid conditions, Wales conceded a similar amount of points in the second-half.

Regan Grace’s try in the corner on the last play of the game were the only points that Kear’s men recorded.

“I didn’t think we performed well in any aspect of rugby league today,” Kear said.

“I think it’s been a very harsh lesson.

“The southern hemisphere fellas really do carry the ball very aggressively and, if you don’t stand up to that, you end up getting rolled and losing field position.

“We just never got any opportunity to attack because we couldn’t prevent the roll on from Papua.

“I’ve got to compliment them, but I think people will now probably see how to handle them.

“We indicated how to handle them to our guys, but we didn’t do it very well.”

The Dragons will now take on Fiji in Townsville on Sunday, November 5 in their second match of the tournament.

On their next fixture, Kear said: “We’re aware that Fiji are similarly a very good side and that Townsville offers similar conditions to these.

“We’re going to have to strip ourselves back and have a really good look at ourselves.

“We have to look at team selection, preparation, personnel and we really have got to have a good look at ourselves in all aspects in order to come up with something better.”