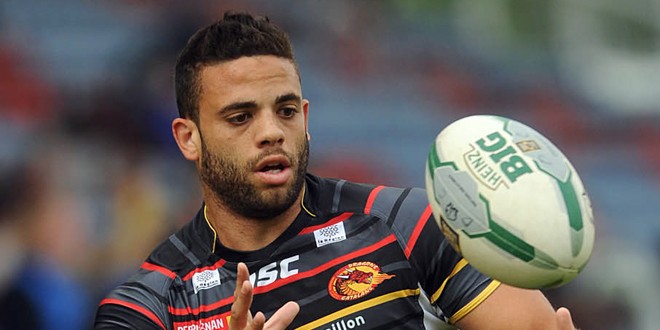 The move to a new club can be a demanding one for any player, but for Kevin Larroyer it’s been a challenge in more ways than one.

The 24-year-old French international has been brought in by Hull KR on a season-long loan deal from the Catalans Dragons.

Playing in the back-row, Larroyer has been ever-present for the Robins in 2014 and scored his second try for his new club in Rovers’ first win of the season against Bradford last week.

His new home in East Hull may be a far cry away from the sun-kissed region of Perpignan, but Larroyer has settled in well to his new surroundings and is adapting to the English way of life.

“It’s a big challenge for me this year. When I made the decision to move to England it was because I wanted to prove that I could play more time on the field and develop as a player,” Larroyer told League Express.

“I was very excited by the prospect of coming to a new country. Having to adapt to the culture is another challenge.

“Everything is new to me here and it’s taken a bit of time getting used to the language, the food and the weather. I speak every week to my best friend Eloi Pelissier and he keeps telling me how nice and warm it is back home. But I don’t mind. I’m very happy to be here.

“The training is not too different, but it is a lot more intense and every session is at 100 per cent. The atmosphere around the sport is amazing. Rugby League in England is supported very well and the people are passionate about it.

“In the first game of the season against Leeds the stadium was full, the noise, the people, everything about it, I say this is why I play rugby.

Larroyer began his career with Toulouse Olympique before moving to the Dragons in 2012, where he was given his chance in their first team by former coach Trent Robinson. He made 17 appearances last season and his whole-hearted performances earned him a place in the French World Cup squad. And Larroyer admits the experience has set a benchmark for what he now aspires to.

“It was my dream to play in the World Cup and the experience was very important for me. All the best players played in the competition and it’s given me an idea of what level I need to be at to succeed, and what areas I need to work on to make that happen.

“Also, I spent a week in Hull before our game against PNG, which allowed me to meet all the staff and have a good look around the place, and the fans gave me a good reception.

“Craig [Sandercock] was a big influence on me coming to Hull KR. When we first spoke he was confident about my potential and he told me about how big the club is in terms of its history.

“My targets are to keep progressing, I can do better and I will do better for this team. I need to work on the little things and make my attacking play as good as my defence. Sandy has told me I need to be consistent every week and that’s what I aim to do.”