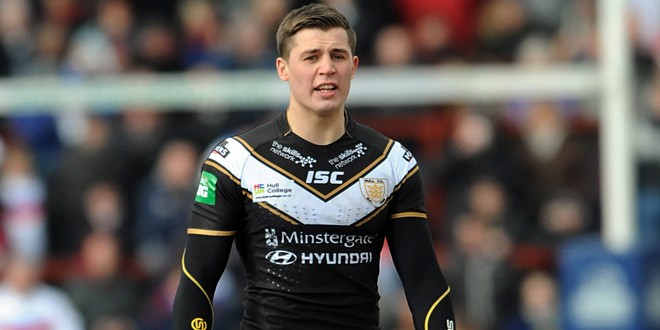 Jamie Shaul says the experience of being under the tutelage of one of Rugby League’s all-time greatest fullbacks is invaluable for his progression at Hull FC.

Since retiring from playing last season, former Warrington star Brett Hodgson has expressed a desire for a new career in coaching after gaining his badges in Australia towards the end of his playing days.

The 2009 Super League Man of Steel was brought in as a coaching consultant by Dennis Betts at Widnes Vikings, before Hull FC’s Lee Radford also acquired Hodgson’s services to act as a mentor for Shaul.

Hodgson hung up his boots at the end of 2013 after a glittering career that stretched over 15 years at the highest level.

Noted for his bravery that belied his slight frame, Hodgson totalled over 350 games for Western Suburbs, Parramatta, West Tigers, Huddersfield and Warrington, winning a plethora of silverware in the process.

And now the former New South Wales representative is handing down his vast experience and knowledge to the next generation of future stars.

Shaul said: “Brett has been coming down and spending one full day with us for the last three weeks and already he’s been a massive help for me.

“At first, he would watch me on the training field and then pull me to one side to tell me where I’m going wrong. When you’re a young kid you think you know it all, but you don’t, and Brett has worked on the little things in my game that make a big difference.

“To begin with it was the basic stuff which sometimes you take for granted and that the fans don’t really see. We’ve worked on my positional play at the back, making sure I am where I should be at different stages of a game.

“It’s been really good so far because I’ve never really had that one-to-one specific coaching from another fullback. When Brett speaks, you listen, he’s been there and done everything and you know when he tells you something it’s going to be right.

“Brett was an all-round player who had many strings to his bow and used them effectively both here and in the NRL. I’m looking forward to spending more time with him and learning as many different skills as I can to help develop my own game.”