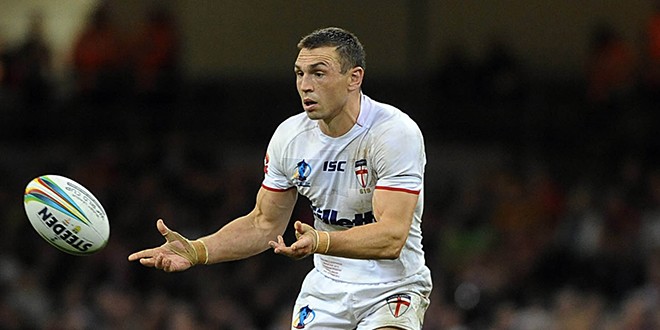 The Oldham-born international has been capped 26 times for England dating back to his debut in 2000. He received a further 14 caps for Great Britain during that period.  Sinfield has appeared in the last three World Cups and has scored 176 points for England.

Commenting on his decision to retire from international rugby ahead of this season’s Four Nations in Australia and New Zealand, the 33-year-old said, “This is a decision I have taken a great deal of time over and it has been the toughest of my professional career. I have always loved playing for my country, whether for England or Great Britain, and it has been a privilege and honour to lead my country for the last two seasons. What has made the process easier is the knowledge that the environment Steve McNamara has created will continue the progress we have made in the last few seasons.

“I would like to thank Steve, not only for choosing me to captain England, but also for the support and guidance he has given me over the last few years. I would like to thank my family who have always supported me throughout my international career and all the England and Great Britain coaches I have worked under and of course my England and Great Britain team mates.

“The World Cup last year was a major step forward for the England team and the support we received reached a new level. I would like to thank the England and Great Britain fans who have always given me their support and I am sure more successful times are not far away.

“Following the World Cup, I was keen to continue however I want to be able to perform at the highest possible level whenever I take the field. I believe that by taking this decision, it will enable me to do that for the Rhinos for the remainder of my career.  I will cherish my memories of international rugby, they have helped shape me into the player I am today and it has always been special to pull on the England or Great Britain shirt. Steve and the team have a great opportunity this year in Australia and New Zealand and I wish them all the very best for the Four Nations.”

England coach Steve McNamara said: “Kevin is the ultimate Rugby League professional and it has been a privilege to work with him in the last few years, when his attitude, application and enthusiasm have rubbed off on everybody.   His contribution and commitment to the England programme has been exemplary.

“I know that he has not taken this decision lightly and having spoken to him at length in the last few days I fully understand his reasons for calling time on his international career.

“Kevin’s achievements with Leeds Rhinos are well documented and this decision will allow him to focus fully on extending his record as the club’s most successful captain.”