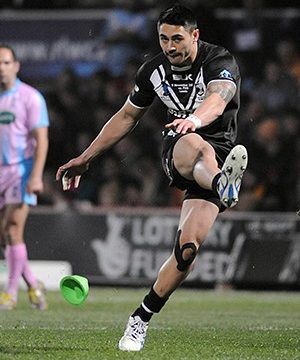 New Zealand held off a late Australian comeback to gain a 26-24 victory today at Mt Smart Stadium in Auckland, teeing up the autumn Test series against England perfectly under their coach Michael Maguire, who was appointed in May this year.

The Kiwis came into the game with a new captain in Dallin Watene-Zelezniak, who was delighted with his team having inflicted Mal Meninga’s first defeat as Australian coach.

“It feels so surreal,” Watene-Zelezniak said.

“We are still building, We have only set the foundations now but we have to keep building.

“Everyone was just on. We were a bit shaky at times but we this is just the beginning.

“That’s what we came here for to give the fans.

“I think we take a lot of confidence. We have got some work to do but we are on the right track.”

It was the Kiwis’ first win over the Kangaroos since the 2015 Anzac Test. Both teams were entering a new era, with the Australians lacking Cameron Smith, Johnathan Thurston, Billy Slater and Cooper Cronk, while the Kiwis were missing several injured stars, including Roger Tuivasa-Sheck, and they gave debuts to Joseph Manu and Brandon Smith, both of whom shone in an outstanding victory.

The Australians scored an early try to Valentine Holmes, but they suffered a blow when they lost halfback Luke Keary on 17 minutes.

The Kiwis took an 8-6 lead with tries by Ken Maumalo and Joseph Manu, but the Aussies hit back just before the interval with a long-range try by Dane Gagai following a run from Tom Trbojevic for a 12-8 lead.

Hooker Smith put the Kiwis ahead for the first time when he crashed over from dummy-half in the 54th minute for Shaun Johnson to convert, and they added two more tries from Esarn Marsters and Jordan Rapana, which came from a superb Manu offload near the corner post.

But the Kangaroos struck back with late tries by Felise Kaufusi and James Tedesco to give butterflies in the stomachs of the enthusiastic home crowd. But they were able to hold on for victory.