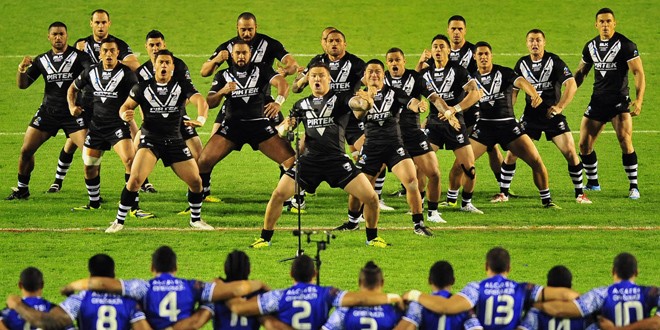 Shaun Kenny-Dowall rescued New Zealand with a try four minutes from time, as the Kiwis scraped home 14-12 against a committed and enthusiastic Samoan team in Whangerei today.

In front of an enthusiastic and noisy crowd of 16,912 spectators, the Samoans took an early lead when Tautau Moga,who had replaced Antonio Winterstein on the wing, intercepted a loose New Zealand pass from fullback Peta Hiku and raced 80 metres to score.

The try was unconverted, and the Kiwis took the lead minutes later with a try by stand-off Kieran Foran, created by a smart piece of dummy-half play by Issac Luke, with Shaun Johnson’s conversion giving the Kiwis a two-point lead.

But after 18 minutes the Samoans were back in front, when winger Daniel Vidot followed up a Ben Roberts grubber to touch down, giving them an 8-6 lead at half-tme.

And they extended their lead when B J Leilua, the outstanding player on the pitch, fended Kenny-Dowall to score their third try.

But Jason Nightingale’s 65th minute try in the corner brought the margin back to two points, and Kenny-Dowall’s late touchdown sealed a victory for the Kiwis in what had been a thrilling match, and a ringing endorsement of the decision to bring the Samoans into the Four Nations tournament.

A full report, photos and analysis from this game will feature in Monday’s edition of Rugby League Express.