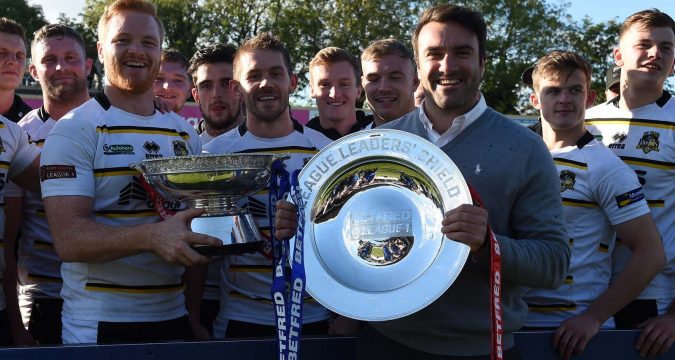 A brand new stadium, a cluster of Super League signings and over a million Twitter impressions during September – it’s hard not to be impressed by York City Knights at present.

James Ford’s squad next year will include Adam Cuthbertson, Danny Kirmond and Ryan Atkins and will play out of one of the best facilities in the sport in a vibrant city.

Off the field, they have continued the trend of recent years in creating a buzz about the club on social media.

But it was only four years ago that the club’s very existence was under threat.

Current owner Jon Flatman formally took charge of the club on December 1 2016, at a time when their place in League 1 had been held back by the RFL, such had been the turmoil at the club in the preceding months.

They were initially omitted from the 2017 fixture list, with the RFL keeping a position open in case the proposed takeover went through in time.

Fortunately for everybody involved with the club it did, and Flatman took the reins in time to hastily put together a squad for that 2017 season alongside James Ford, whose reputation as a bright young coach had already grown in what had been difficult circumstances.

Shortly after the takeover went through, Ford was interviewed by BBC Radio York about the situation and provided some insights that look telling today.

Ford said: “It’s good news for everybody to do with the club.

“Hopefully we can look forward, all pull together and build a club we can be proud of.

“It’s been a difficult two years if I’m honest, but we’ve got through the other side.

“What’s important is that we focus on what’s coming rather than looking back and casting blame.

“If we all pull together we can get some momentum on and off the field.”

The Knights put together a competitive 2017 squad and Ford’s side finished in fourth place behind Toronto, Barrow and Whitehaven.

But their promotion hopes were dashed in dramatic circumstances when Steve Roper’s golden-point drop-goal knocked them out at the semi-final stage.

Still, there was much to build on, and the Knights exceeded expectations again the following year.

Bradford Bulls were heavy title favourites, but finished second behind Ford’s side, who clinched automatic promotion, poetically beating Whitehaven on the final day of the season.

Ford was named Coach of the Year, Connor Robinson Player of the Year and the Knights took the Club award on a memorable evening for all involved.

But the progress certainly didn’t stop there.

In their first season back in the second tier York defied the odds to finish third in an ultra competitive league, above the likes of Leigh, Featherstone and Bradford again.

There was disappointment in the play-offs in heavy defeats to Toulouse and Featherstone, but Ford and the club again won their respective awards, and with attendances continuing to rise off the field, their Super League potential was being widely aired.

The 2020 season didn’t start as was hoped, with four straight defeats in an admittedly tough run of early fixtures.

But in reality that counts for nothing now, and Ford’s recruitment drive and pictures of the city’s new community stadium have all but erased memories of those four losses.

Signing former Super League players is not a guaranteed recipe for success next year, of course, and Kirmond, Atkins and Cuthbertson will all be at least 35 when next season kicks off.

But Ford regularly and openly talks about wanting certain characters in his squad, and all three fit that bill alongside their stellar playing careers.

The Knights have also signed talented London playmaker Morgan Smith and retained the core of their current squad, including a host of players that have made remarkable progress at the club.

And perhaps the most telling factor of all is the signing of youngsters starting to emerge from the Knights’ own player pathway, which Ford and Flatman are hugely focused on.

It all adds up to a time of excitement and anticipation for York supporters, which is a long way from the dark days of four years ago.