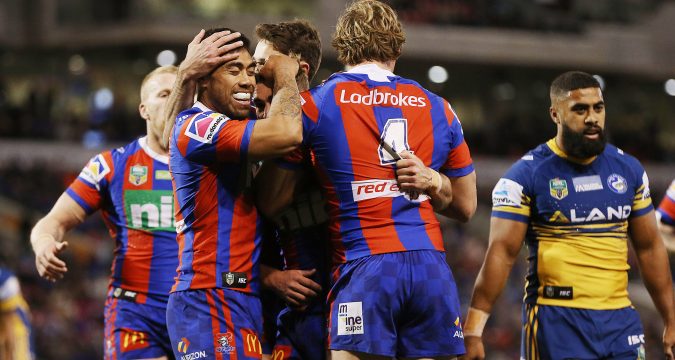 Newcastle Knights welcomed back their key player Mitchell Pearce with an 18-16 victory over bottom-club Parramatta Eels.

The Eels were on top early, however. Siosaia Vave spun out of Josh King’s tackle to go in next to the posts. Then, Jarryd Hayne showed what he could do when he ran into space and found Beven French. The winger kicked inside for Mitchell Moses. The halfback took the ball well and dived over for a special try.

The Knights looked to be on the ropes but Connor Watson’s bizarre try, where he assisted his own try with his face, got Newcastle on the board.

Parramatta had gone away from what they were doing at the start of the game allowing the Knights to head into the break level. Quick improvised hands found Shaun Kenny-Dowall who stepped inside to score.

The Knights continued their good play in the second half. Mitchell Pearce, on his return from a pec injury, sliced through the middle after a nice Chris Heighington pass.

Out of nowhere, the Eels drew back level. Hayne moved upfield and found Corey Norman who was steaming through to score from the half-way line. But Ken Sio’s boot opened up a two-point lead for the Knights which was enough for them to claim victory despite French’s effort in the final minute which was ruled out by the video referee.

Full match reports from all this weekend’s NRL games will feature in Monday’s League Express.