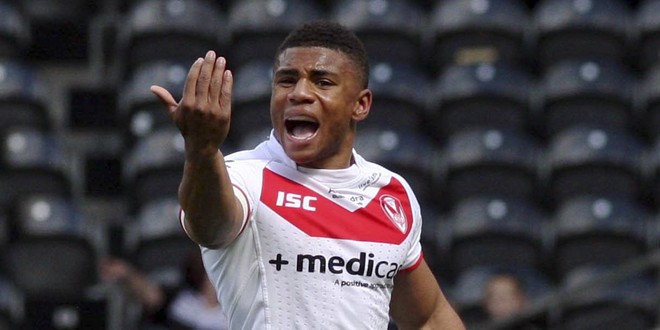 Leeds Rhinos have signed dual-code international Kyle Eastmond, 31, on a two-year contract as he returns to Rugby League after having played Rugby Union since leaving St Helens in 2011.

Born in Oldham, Eastmond made his debut for St Helens in 2007, having joined the club from Oldham St Annes. He became a regular in the side in 2008, often playing alongside current Leeds assistant coach Sean Long.

He had a breakthrough season with St Helens in 2008 and scored all of his team’s points in the 2009 Super League Grand Final defeat by Leeds, as well as gaining England selection for the Four Nations, gaining four caps in total. He scored 15 tries in 19 games in the 2010 Super League season as scrum-half with Saints, as well as kicking 63 goals and two field-goals before switching codes to join Bath. In total, he made 74 appearances for Saints, including 52 in the starting line up, scoring 39 tries, 137 goals and three field-goals for a total of 433 points.

At Bath, he made 72 top-flight appearances, scoring 16 tries, before a switch to Wasps in 2016. He was capped six times by England in Rugby Union between 2013 and 2014, including five starts, three of which were against the All Blacks.

After two seasons at Wasps and eighteen appearances, he moved across the Midlands to join Leicester Tigers in 2018. He made 24 appearances for the Tigers before leaving the club last summer.

Eastmond will wear the squad number 33 at the Rhinos.

Commenting on the signing, Rhinos Director of Rugby Kevin Sinfield said, “We are delighted to be able to bring Kyle Eastmond back to Rugby League. With the injury to Rob Lui, we have been keen to boost our options in the halfback position and I am sure Kyle will excel in our environment. We have been speaking over the last week and I know he had a number of options both in England and overseas to continue his Rugby Union career. The fact he is coming back to League is great news for us and the Super League competition.”

Leeds coach Richard Agar added, “I first worked with Kyle in the England Academy in 2006 and he has always been a naturally gifted halfback. He is an explosive runner and was part of a very successful St Helens squad. I know he will work well within our group and with our coaching team, especially Sean Long who he knows well from his days at Knowsley Road. Inevitably, there will be a period of time whilst he reacquaints himself with Rugby League after a decade in Union but I am excited to see how he develops in the coming weeks and months.”

Commenting on joining the Rhinos, Eastmond said, “I am excited to be coming back to Rugby League. Just like the timing was right for me when I went to Rugby Union, I think the time is right for me to come back to League now. I was coached by Richard Agar when I was younger and obviously played alongside Sean Long at Saints. This move is about me playing my very best rugby and I think this environment and this group of staff and players, gives me confidence that I can do that. If I’m happy and in the right environment then that means I can play at my best and I think that is what is going to happen.”