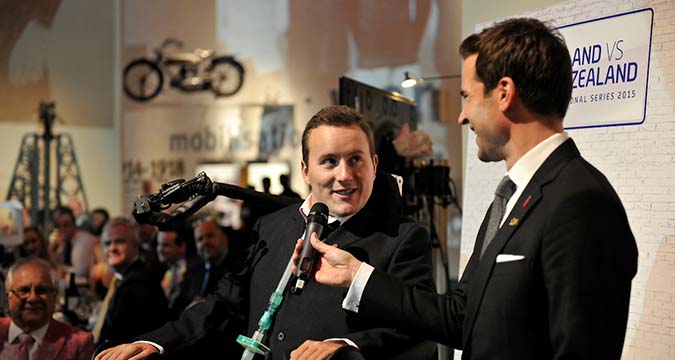 HOMAGE TO A TRUE GREAT

I was extremely upset to hear of the premature death of Matt King, who is probably the most courageous person ever to play Rugby League.

I first became aware of Matt when I threw a pound coin into a collection bucket for a young London Broncos player paralysed in a tackle. Five years later, I wheeled up alongside him at a bar in Sweden, on a skiing holiday. He bought me a drink when I told him about my pound coin

In some of my own darker days, Matt’s positive outlook has been a true inspiration.

What strength, what resilience; a truly great human being.

Thank goodness the Super League clubs would have nothing to do with a Private Equity Fund (PEF); I think we use to call them ‘asset strippers’ years ago.

Such funds exist purely to make short-term profits, by way of expenses, interest and dividends. As soon as the money stops coming in they bale out, leaving others to deal with a difficult situation.

One famous British company owned by a PEF recently became insolvent. The PEF disappeared, leaving lots of unpaid debts and thousands of staff redundant. The PEF people were alright, however. They had taken 1.2 billion pounds out of the business over a period of five years.

Those chairmen and owners of Super League clubs who did vote for the proposed deal have shown that they are not fit to be in charge of a top sports club. Unfortunately, however, both the clubs and the RFL have had to live with incompetent people being in charge for many years.

For what? Absolutely nothing! I hope the clubs that voted against this deal are not expected to pay towards that huge cost.

It was good to read in last week’s League Express the sensible comments from Derek Beaumont, the Chairman of Leigh Centurions.

It’s a pity we don’t have more people like him in charge of clubs.

I am pleased that Robert Elstone has handed in his notice; he should not be allowed to stay in the position of Executive Chairman a minute longer.

There will be a cost to paying him off, but his Chairmanship has been a disaster for Rugby League. His opposition to Toronto continuing in Super League and his stating that he saw no future for the sport on the North American continent were mind-blowing stupidity. Especially so, as they were followed up by continuing to negotiate a contract with Sky, which was then taken over by Comcast, a North American company, not to mention appointing a North American to manage the company in the United Kingdom.

How could he negotiate a new Sky Sports agreement after actively promoting a contraction of the sport and displaying an obvious lack of ambition?

After telling Sky that the sport is worth ‘X’ amount of money but is now walking away from the biggest sports market in the world, how could he also promote a private equity funding arrangement, the failure to achieve an agreement on which will cost Rugby League club reputedly £750,000?

All of which above no doubt combined with a costly pay off for Mr Elstone and the cost of a contract for another Executive Chairman brought in to sell the sport.

Rugby League is currently confined to two visual outlets – Sky Sports and the BBC. It seems Sky has a stranglehold and will not let go. But why? Other sports have broken free and can be seen using alternative broadcasting outlets.

This is the year of the Rugby League World Cup, which is our platform to sell the sport on the world stage. Who and how is the sport going to be sold? Who is going to bring in the revenue that Elstone’s role should have achieved?

He failed miserably, but in saying that he was aided by many myopic, small-minded Rugby League club chairmen, owners and supporters.

IN TRIBUTE TO ‘CAPTAIN TOM’

Further to Richard Sanderson’s letter in League Express (Mailbag 16 January), I think the Rugby Football League should invite the family of Captain Tom to attend the Rugby League World Cup Final on 27 November this year.

They should take them onto the pitch after the match and introduce them to the crowd, before they present the Man of the Match trophy to the winning captain.

Some years ago, I introduced to both family and friends a new fun sports game, which I called the ‘Lowest Points League’.

The aim of it was to score the least number of points possible in a given Super League season.

In pre-season, each participant was asked to place the twelve Super League teams in the order in which they thought the teams would finish at the end of the season. For each team selected in the correct position no points would be scored.

Therefore, for example, if you had selected the above-named teams in this order; Wigan first, Warrington second, St Helens third and Salford sixth, you would have scored a total of eight points, calculated as follows: Wigan 1pt, Warrington 2pts, St Helens 2pts, Salford 3pts. The total number of points scored, following rounds 6, 12, 18 and 23, were then added together at the end of the season to establish the overall winner. And in the event of a draw, a points difference score would decide the winner.

Total points difference at the end of the season of +160.

HOW ABOUT A LORD?

I understand that Her Majesty is having a problem deciding who to appoint as Patron of the RFL.

As one of those who do not wish Prince Harry to continue in the role, I hope the RFL is giving some thought to the matter, as, although this is an issue for the Queen, there might be some opportunity for the RFL to influence the appointment.

For many years, Lord Derby was a stalwart President of the League, appearing at all major matches. His family have long connections with the North West and a Stanley forebear was influential in the cessation of the Wars of the Roses.

The position of President has now been redefined as an occasional appointment and clearly the President should be someone of national standing. Would the present Lord Derby therefore, if asked, be willing to serve, and would he be acceptable to the Rugby Football League?

An alternative thought, crossing the Pennines, would be Lord Harewood, who is a relative of Her Majesty.

Remember the simple days, when each sport had a universally accepted set of rules; apparently, some still do.

I thought of that while watching one of the French games over the Internet last weekend, and asked (in the comments space) if they were playing to Super League, Rugby Football League, NRL or International rules.

“Well, they’ve got scrums,” came one answer, “so not Super League”.

Rugby League is a funny old game. More sets of rules than petals on a daisy.

It put me in mind of playing pool in pubs in the 1970s, when ‘house rules’ applied.

I was pleased to read that Martyn Sadler has never been a fan of using a ‘golden point’ to decide drawn Rugby League games (Talking Rugby League, Feb 22).

I can’t remember him ever coming out with it so clearly.

To me, it seems an unnecessary gimmick that does nothing for the integrity of Rugby League.

Golden point is fine for one-off matches that depend on a knock-out element, but not for league situations. As I recall, it was introduced by the now departing Super League Executive Chairman, so after he’s left could the golden point be quietly dropped without anyone having to lose face.

We could then return to a league in which two teams who have battled to a draw each take away one deserved point.

WHERE WAS OUR MENTION?

In the Express newspaper last Monday, there was a picture of Gabby Logan ‘limbering up’ for major sporting events to be covered by the BBC this year.

Mentioned were Football’s Euro 2020, the Tokyo Olympics, the Lions Rugby Tour of South Africa, but no mention of the Rugby League World Cup.

Where was the marketing for that event?

NOT A FAIR SEASON

As things stand, we will be starting the season not knowing if there is to be promotion or relegation.

How can there can be relegation, when we will not be playing on a level playing field?

Why not have a round at the KCOM Stadium? Yes, as a Hull KR season-pass holder for 54 years I may have a vested interest, but I don’t believe relegation will be a problem for us this year. We have the best squad we have had in years.

Why don’t we follow the NRL model of fourteen to sixteen teams in the league; we follow them in everything else?

ROOKIES ON THE RISE

I’m always interested to see your annual feature on young rookie players who are out to make a name for themselves every season.

Inevitably some will succeed while others will fail, but I would be very interested in a feature in which you listed all the rookies profiled in this feature since you first started it, many years ago. Perhaps you could do it on a club by club basis.

I would love to know what proportion of rookies actually made the grade, and it would be just as interesting to see which players became superstars without having been featured in your list of promising rookies.

If you decide to run an article of this kind I shall be very keen to read it.

I do not agree with ‘OurLeague’ charging for matches on their App.  For me, as a casual fan of the game, they should show at least two games a week free of charge, for everyone to watch.