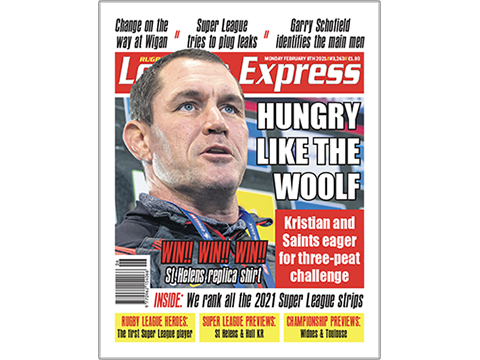 FROM RUSSIA WITH LOVE

While at home, here in Spain, with League Express on my iPad, I read the article about the Gloucestershire All Golds supplying kit to help the resurgence of Rugby League in Russia (League Express, Feb 1).

I was very pleasantly surprised to see the name Alexander Kolikov, the Russian Rugby League President. I met Alexander many years ago when I was in Moscow. I was an art teacher at the time and I had organised a cultural visit to Russia. I was asked by the Wigan Amateur Rugby League to make contact to open up channels of communication, fax being the cutting-edge technology at the time.

We met up with Alexander and his colleagues and we were overwhelmed by their generosity and hospitality. They arranged an exhibition match for our benefit before we went to see the ballet at the sumptuous Bolshoi – a quantum leap from the sublime to the ridiculous.

I was asked to organise a tour of England the following year. Alexander arrived with adult and Under-16s squads. They played Wigan St Patricks, my hometown club of Blackbrook in St Helens and Humberside Police, who all provided fantastic hospitality. Alexander stayed at my house in Wigan, and what a gentleman he is. He loves his Rugby League.

The newsworthiness of a Russian touring team became evident. We received a letter from the House of Commons from the All-party Parliamentary Rugby League Group, we had a meeting with Maurice Lindsay in Leeds, interview by BBC TV and press articles. Even Open Rugby Magazine got in on the act.

Congratulations to Lionel Hurst, the All-Golds’ Chairman for his initiative, and I hope other clubs will follow. When we are clear of Covid, Russia would be an excellent choice for future tours. St Petersburg and Moscow are beautiful cities and the cultural experience will leave a lifelong impression on everyone. The recent debacle with Toronto Wolfpack illustrated clearly that the Super League clubs are only interested in their own little world. So perhaps the way forward in expanding Rugby League lies with the lower leagues, conference and amateur clubs.

Rugby Australia has offered the British Lions the chance to tour there if they can’t play in South Africa. They said the more International rugby the better.

I know it is the Rugby League World Cup this year, but the lack of international Rugby League played over the last few years is disgraceful. I can’t even remember the last international game and neither can the press or media, yet that is where the game receives publicity. I can, though, remember the awesome scenes at the Tonga games in New Zealand.

All that euphoria has been lost. We can’t even organise a Four Nations contest.

Imagine Rugby Union not having the Six Nations every year. Surely the players want to play for their country in the bigger arenas. Maybe the blinkered Australian Rugby League should take notice of Rugby Union and realise State of Origin isn’t everything.

I wrote to St Helens asking for an answer to what I thought was a perfectly reasonable question.

I pointed out that I have been supporting Saints for sixty-five years, that I am a founder member, that I donated last season’s season ticket money and purchased a cardboard cut-out, and that as I am having a couple of operations this year I will miss some games.

On the basis of the above, I asked if someone else could use my ticket, and in the event that it was passed on to an adult, rather than a concession, I would pay the difference. It is now six-weeks or more since I sent that letter to the management team, so I guess I am not going to get a response to my perfectly reasonable question. It’s not good.

We are living in strange times, so if there is a reasonable reason why I have not had a response, I apologise, but I would hope to receive an answer eventually.

If you are from St Helens give yourself a pat on the back. Not only have you helped to create a Champion team, you also have a stadium that is currently helping to save thousands of lives.