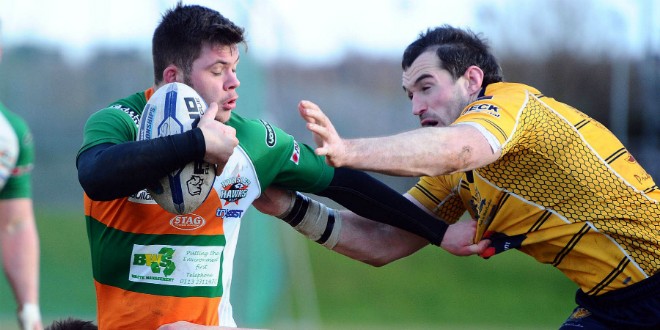 League Express takes a look at the young players who could make a big impression in the new Super League season as contenders for the Albert Goldthorpe Rookie of the Year Medal.

We have selected one player from each of the 12 Super League clubs, and you will be able to join us in charting their progress throughout Super League XX.

The 2015 Rookie of the Year won’t necessarily come from the list of players on this page, however, and there will be plenty of other young players bursting to make an impact.

So here are the Super League rookies who we suggest you should follow during the 2015 season. We list one player from each club, his date of birth, the number of Super League games he has already played before the start of the season and his junior club.

Castleford Tigers: Will Maher
WILL MAHER was the first player to sign for a Super League club from a Regional Academy when he joined the Tigers from Cumbria two years ago.

A towering prop forward, Maher is still young enough to play for the Tigers’ under-19s side in 2015, with head coach Daryl Powell having that option, a partnership agreement with York, or first-team action as the potential learning curve for Maher.

An initial 12-month loan from the Cumbrian Academy was soon ditched for a permanent deal with the Tigers, with Maher constantly impressing in the Tigers’ Academy. He represented England Academy on home soil at the Jungle against the French in May, and played in both of England Academy’s games against the Australian Schoolboys in December.

Powell handed Maher his Tigers debut at Warrington last August and he could be one to watch out for in 2015 at Castleford.

Catalans Dragons: Gadwin Springer
He is just 20 years of age, but Catalans prop forward Gadwin Springer has been developing in France with the St Estève XIII Catalan club in the French domestic competition.

He has been a regular in that competition for the past two seasons under coaches Cyrille Gossard and Steve Deakin, the latter now the Whitehaven coach. Born in Guyana, his family moved to Villeneuve, but it was for Toulouse where Deakin spotted him playing junior Rugby League. Head coach Laurent Frayssinous gave Springer a first team opportunity at St Helens when the Dragons had an injury-hit start to the 2014 campaign. Perhaps more can be expected of the prop in 2015.

Huddersfield Giants: Jake Connor
ANYONE taking a glance at the 2015 Huddersfield Giants squad numbers will see a number of young players listed between numbers 22-29 who would be only too happy to get amongst the nominations for the Rookie of the Year award this season.

That includes two players listed last season in our ones to watch – Oliver Roberts, then at Bradford, and aspiring young Giants fullback Jake Connor, who confirmed his talent with five tries in seven outings last season.

Connor was an outstanding and often match-turning figure in Chris Thorman’s under-19s side last season. Now too old for that age-group, he will be hoping that a spot in Anderson’s side will be more frequent in 2015. Otherwise those youngsters are likely to have opportunities playing for Anderson’s former Bradford team-mate Scott Naylor under the Giants’ new partnership arrangement with Oldham.

Radford has recruited plenty of experience for the new season, clearly b

elieving that old heads will be vital in what will be a testing season for all clubs under the new format.

But Abdull has already shown signs of breaking through into the first team and starred for the England Academy against the Australia Schoolboys.
He showed remarkable development in 2014 and was rewarded in the second half of the season with seven first-team outings, mainly at stand-off. His coach now sees him as a loose forward, where his ball-playing skills could play a significant role for the Airlie Birds.

Hull Kingston Rovers: Macauley Hallett
MACAULEY HALLETT was one of three youngsters to make debuts for the Robins in 2014. He was joined by halfback Connor Robinson and forward Sonny Esslemont, but it was centre Hallett who made the most eye-catching bow.

He played in each of the final two games for the Robins, making his debut in the home game against Catalans Dragons and then playing in their final match of the season at Wakefield.

He scored on his debut against the Dragons and went one better at Wakefield when he grabbed two tries. A product of the West Hull club, Hallett is a classy centre who can also play on the wing.

Leeds Rhinos: Andy Yates
NOW in his second season at Headingley and with his second club at the top level Andy Yates has still to make the breakthrough and grab a game in Super League. He would surely have done that in 2014 if injury hadn’t decimated his season.

Yates played his early professional Rugby League for Hunslet Hawks, where he became a consistent performer for them in the Championship. Leeds took a punt on the prop forward, but his start at Headingley was ruined by an Achilles tendon injury suffered in pre-season training in November 2013.

He came back, playing on dual-registration for his former club Hunslet, only to rupture the tendon in his bicep playing against Hemel.
With the departure of Ryan Bailey and Ian Kirke from Headingley, 2015 could be a much better year for Yates.

Salford Red Devils: Liam Hood
ONCE hailed as the next big thing at Leeds Rhinos where he was tipped for the top after an outstanding debut, Hood will be keen to make the most of his second chance at the top level.

Vying with Paul McShane to make the breakthrough at Headingley – he signed a four year deal ahead of the 2012 campaign with Leeds – both would leave for pastures new, Hood having only made five Super League appearances in 2012.

He joined Hunslet Hawks in 2013 for a two-year stint, playing part-time rugby in a move that revitalised his career. Now on a two-year deal with the Red Devils, he’ll be hoping to make the impact many at Leeds expected and which Hood promised with that superb debut against Castleford nearly three years ago.

St Helens: Andre Savelio
IF there’s one name that has been on the tip of the tongues of fans of 2014 Super League winners St Helens, then it’s forward Andre Savelio. Because of his exciting and hard-hitting running style Savelio has captured the imagination of the Langtree Park faithful. Yet his progress has been held back by illness and he still has a fight on his hands to progress.

Like most players of his age he has a number of seasoned professionals ahead of him in the St Helens squad. But because of the success of their Academy he also has a number of players just a year or two older who have already gained valuable experience and game time in a Super League winning squad.

Whether he can break through remains to be seen, and a dual-registration stint might be more to the liking of the Saints’ top brass.

Wakefield Trinity Wildcats: Tom Johnstone
BORN in Germany, winger Tom Johnstone has been consistently been putting his name in the shop window at Wakefield with a number of eye-catching displays for their under-19s side.

The former Stanningley junior has played in each of the Boxing Day pre-season matches against Leeds Rhinos and trained with the club’s senior squad in 2014 without making his breakthrough to the first team.

He signed a full-time deal with the club mid-way through the 2014 season and looks likely to follow fullback Max Jowitt into the Wildcats’ first team from last season’s Academy squad. As well as being a regular try scorer he was also a goal kicker for Stanningley in his junior days.

Warrington Wolves: Joe Philbin
ANYONE who watched the 2014 Academy Under-19s Grand Final will have seen the potential of Joe Philbin. Despite his side going down to Wigan Warriors at the Halliwell Jones Stadium he put in a man of the match performance and scored three tries.

Regular Warrington fans will have already seen Philbin make his Super League bow in a round 16 game at Hull Kingston Rovers last season. Since then he’s made two further appearances for the Wolves, also off the bench, in games against London Broncos (h) and at Widnes Vikings.

Philbin played his early rugby with Culcheth Eagles before moving on to Latchford and then into the Wolves Academy, where he was an ever-present in 2014, grabbing 18 tries in a side that finished top of the table in the regular season. In 2015 it wouldn’t be a surprise to see Philbin gain first-team action with North Wales Crusaders under the dual-registration deal the two clubs announced recently.

Widnes Vikings: Liam Carberry
Widnes fans have already seen the potential of Carberry, who joined the Vikings ahead of the 2014 season and played five games from the bench. That figure would have been many more if it had not been for injury, although his talent was rewarded with an extended contract with the Vikings.

A broken leg and ankle ligament damage restricted his opportunities in 2014, while an anterior cruciate ligament injury meant that he suffered an 18-month lay-off during his time with Wigan Academy. Carberry is a former England Academy international who played one game for South Wales Scorpions in 2012 on dual-registration.

Wigan Warriors: Ryan Sutton
Ryan Sutton moved up the pecking order at Wigan Warriors with his performances in the 2014 season after his debut in the Bradford rout in April.
With Eddy Pettybourne released, Ben Flower suspended and Scott Taylor now at Salford, a window of opportunity has appeared in the Wigan ranks, and Warriors coach Shaun Wane is noted for handing opportunities to young players.

Sutton has made good progress under the mentorship of John Winder and Matty Peet in the Wigan Academy and is now too old for that age-group. Regular first-team action with Wigan or partnership club Workington Town would appear the logical step for the young forward.

Prior to joining the Wigan Scholarship programme he played his junior rugby with Wigan St Pats and gained England Academy representative honours in 2015.