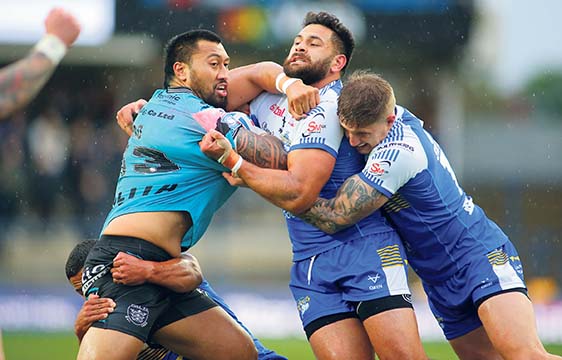 Josh Griffin outlined his England credentials with a superb performance, assisting one try and scoring another as Hull just about clambered over the line against a desperate Leeds side.
The cold temperature at Emerald Headingley contrasted greatly to the piping hot tension out on the field as things threatened to boil over on a number of occasions, with the visitors’ defence resembling a brick wall for most of the second-half.
Zane Tetevano and Richie Myler returned from suspension for Leeds, whilst James Donaldson was back from injury. Bureta Faraimo was on the bench for Hull, taking the place of Cameron Scott.
An early 40/20 from Marc Sneyd handed Hull terrific field position in the opening exchanges. However, that came to nought as the returning Myler slid across the turf to pick up a Sneyd grubber.
And, despite forcing a drop-out soon after, Hull knocked on, handing Leeds the opportunity to finally get out of their own half.
After a shaky start, the Rhinos were carried up field by a penalty and, following a six again, the home side crossed as Liam Sutcliffe took three defenders with him on the way to crossing the line. Rhyse Martin converted for a 6-0 lead after 12 minutes.
Leeds were piling on the pressure, but a lost ball handed Hull the chance to move upfield. And, following a Danny Houghton break, Josh Reynolds was taken out off the ball.
That resulted in a penalty, with Luke Gale lucky not to be sin binned for a professional foul.
That didn’t matter to the visitors, though, and Adam Swift was fed by a superb Jake Connor pass to go in for a four-pointer in the next set just before the midway point in the first-half. Sneyd converted expertly from the touchline to restore parity.
It was tit-for-tat throughout and two six again rulings had Leeds prowling the Hull line before an offside call against the visitors allowed Martin to edge his side in front, 8-6.
By now Leeds were purring and their staunch tackling had Hull on the back foot.
Alex Mellor thought he had taken advantage of that stellar defence just before the half-hour mark from a Gale kick, but play was brought back for a Myler knock-on.
Hull made that error pay a minute later as Griffin powered through a huge hole left by Konrad Hurrell before drawing Myler and offloading to Swift who cantered over for his second try.
Sneyd was again on target to put the Black-and-Whites 12-8 up.
The momentum had clearly swung the visitors’ way, and, following a drop-out, Griffin stepped his way through some poor ball-watching from Hurrell on 37 minutes, much to the chagrin of the home support.
Sneyd converted to make it 18-8 in the blink of an eye, with the Leeds fans booing as the two sides walked off for half-time.
After conceding a drop-out early on, Hull then forced two themselves. Yet, with the return of Mikolaj Oledzki, Leeds were renewed and began growing in confidence.
That said, Hull weathered the storm and quietened the vociferous home crowd with some brilliant scrambling defence.
It certainly was a war of attrition, but substitute Brad Dwyer ignited the Rhinos’ attack, creating a break before offloading to Tom Briscoe just before the hour mark.
Briscoe should have scored, but was felled and then remarkably rolled over one time too many to be held up by a desperate Carlos Tuimavave.
Pushing and shoving took place following the try with Andre Savelio and Oledzki almost coming to blows.
But, that was almost academic as Leeds thought they had scored a minute later, as Myler touched down a loose ball.
The groans of Leeds’ South Stand were heard loud and clear, however, when referee Marcus Griffiths went to the screen and that proved that Sutcliffe had knocked on Gale’s kick.
Leeds were applying all the pressure, camping near the Hull line for most of the second-half, but they just couldn’t breach the visitors’ line.
That was the story of most of the second-half until it came to the 77th minute.
Tom Briscoe finally got over the line after a number of missed opportunities following great work by Brad Dwyer, though Martin couldn’t convert from out wide to leave it a six-point ballgame.
It was, however, too little too late for Leeds despite a valiant effort and despite the home side dominating for most of the proceedings.

GAMESTAR: Josh Griffin caused Konrad Hurrell all sorts of problems throughout the game.

GAMEBREAKER: Carlos Tuimavave’s tackle on Tom Briscoe just before the hour mark was a key indicator that it wouldn’t be Leeds’ day.

TOP TACKLE: Carlos Tuimavave somehow held up Tom Briscoe when it looked easier for the Leeds man to score.