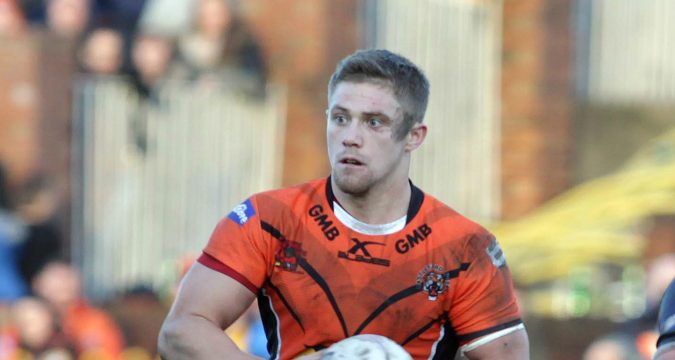 Leigh Centurions have confirmed the signing of Wigan Warriors utility back Ryan Hampshire on a two-year contract. Hampshire has spent the 2016 campaign on a season-long loan at Castleford Tigers, scoring eight tries in 22 first-team appearances.

Leigh Centurions coach Neil Jukes said: “Ryan wants to challenge for a first-team spot and can play halfback, fullback or wing and do a good job in all departments. First and foremost his aim is to claim a place in the starting 17 in one of those spots.

“I remember him coming off the bench against us in a pre season friendly at LSV and he made an impact straight away. He has energy, sharpness and an eye for an opportunity and he will bring freshness to our squad. We have added some youth lately and Ryan’s signing enhances that energy in the squad. He is spoken of very highly and having come through the Wigan system has had a great grounding in the game.

“Ryan will get his opportunity in the off season to stake his claim and he will push a lot of other players for a back-line spot. We know that next season will be a tough one and we need strength in depth in every position. From a coach’s perspective the fact that he offers such versatility is an added bonus.

“I’d like to thank Kris Radlinski and Andy Clarke for their assistance in Ryan making this transition to Leigh while he was still contracted to Wigan and all the coaching staff will look forward to working with him.”

Leigh owner Derek Beaumont said: “It is important that we bring some young players to the Club to balance the mix of the experience we have. Ryan has come through a top quality system at Wigan so has all the key ingredients. He also has a lot of pace which is essential in any team.

“All players know that you can’t win anything with seventeen players and to be successful you need strength in depth and Ryan’s versatility gives us that in a few key areas. We have a very good coaching team in Neil, Kieron and the two Pauls and I believe with their hard work and determination, matched by that of Ryan they will enable him to continue to improve into a force to be reckoned with. I am looking forward to seeing him in a Leigh shirt.”