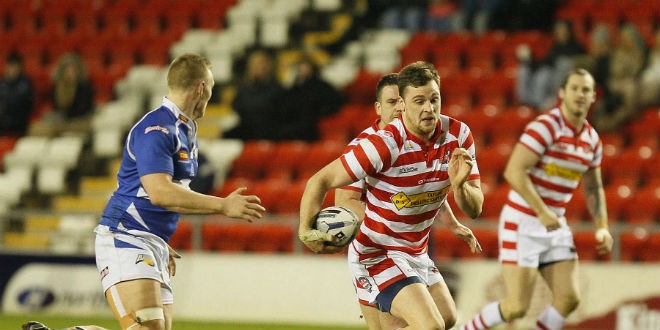 Leigh Centurions have continued their recruitment for their full-time campaign in 2015, after securing the signing of Wigan Warriors forward Sam Hopkins on a season-long loan deal.

Hopkins, a former Centurions player himself before joining the Warriors at the end of last season, has made several appearances for Leigh on loan this year, but he will spend the entire 2015 season at the Leigh Sports Village next year after agreeing a one year loan.

Leigh coach Paul Rowley said: “I am delighted to add Sam to our squad as a permanent fixture in 2015. His experience this year with Wigan has accelerated his transition into a professional athlete after capturing him late from the community game.

“Sam is clearly happy and focused at Leigh and is very much a big part of our future. I would like to thank Wigan for their excellent communication and assistance throughout the process.”

Leigh head of rugby Derek Beaumont said: “I am delighted to have secured Sam’s services on a loan deal.

“The 2015 season is an extremely important one for the club and one we don’t want to go into with any degree of uncertainty. Sam has been with us virtually all year and has really found his form in recent games. He was outstanding in last Friday’s victory over Featherstone Rovers and has clearly benefitted from being in a full-time environment at Wigan.

“I’d like to thank Wigan for the help they have given us in securing Sam’s services. It’s clearly a feather in our cap that they see Sam will clearly benefit from playing under our coaching structure and systems.”