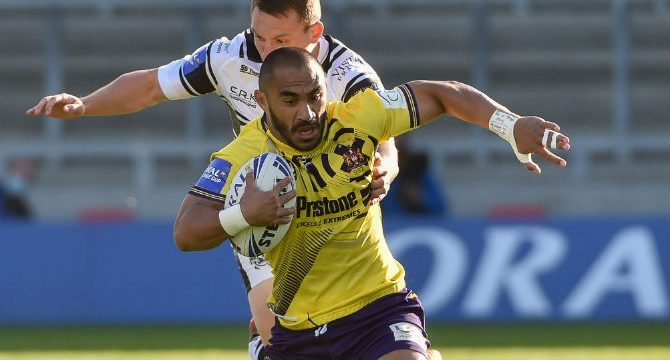 New Wigan Warriors captain Thomas Leuluai recognises that he has big boots to fill in stepping into the shoes of Sean O’Loughlin, but he is determined to instil some of the leadership qualities shown by his immediate predecessor.

“I’m very honoured to be given the role and I understand the responsibility and what’s needed,” said Leuluai.

“I hadn’t given it too much thought because it wasn’t what I’d aimed for and I had no ambition to be a captain. But now I’m just going to crack on with it and enjoy it.

“Having said that, it was a complete surprise.

“Fortunately I’ve been very lucky to have a good captain and a really good person to learn from. I’ll try to mirror him and always put the team first; with Sean, it’s never been about him, and hopefully some of that rubs off on me.

“So far I haven’t put too much thinking into it, but I saw the list of names who have captained the club before me, and someone mentioned that I’m the fourth Kiwi to captain the club (after Ces Mountford, Graeme West and Dean Bell).

“I do reflect a little bit. I don’t get too sentimental, but when I look at previous captains like Andy Farrell and Ellery Hanley, I recognise that an honour this is. I don’t put myself in that category of player, but I am privileged with a lot of responsibility. I’ve played with some great leaders who were not always captains.

“But I never want it to be about me. I’d much rather let people do their own thing and be at the back.

“Simon Mannering at the New Zealand Warriors was really good at doing that.”

When asked if his new role means that he will play 80 minutes, whether as a halfback or hooker, Leuluai is non-committal.

“And as for my position, I’ve been 50/50 split half and hooker for my whole career. In the last couple of years I’ve played mainly at seven.”

Leuluai’s first game in charge will be against Leigh this Friday, although the game will be played without a crowd at Headingley.

“I know how passionate Leigh are. They have a lot of connections with Wigan. It’s a game we are really looking forward to.

“They will be highly motivated against us.

“We are not planning to play ugly, we just want to play our natural game and I’m sure we’ll be okay.”

Leuluai will have a leadership group among his team-mates to fall back on, including John Bateman on his return to the club this season.

“I have definitely seen a change in Batty. He’s always been a competitive, wholehearted player, but his professionalism since coming back from Canberra is impressive. The amount of work he put into his body even before pre-season started is remarkable.

“He is a bit like me, in that he is most probably a leader by his actions. I’m not one to talk when I don’t need to and the captains I’ve most admired are the ones who led by example.

“All the great teams you look back on, you’ll see that it’s not just one captain who leads the team.

“I’ll be encouraging people outside the leadership group to lead too. We want everyone to step up and lead at times.”