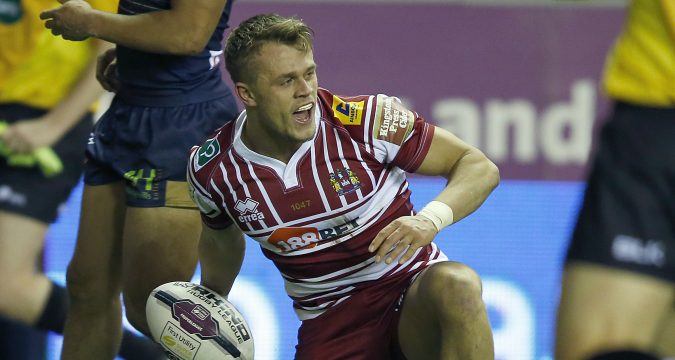 As a Christmas present from us to you, over the next 12 days we will feature some of the best content from Rugby League World in 2016. In this instalment, DAVE HADFIELD speaks to Lewis Tierney about his emergence in the Wigan team.

Lewis Tierney has taken a big step towards becoming recognised as his own man on the rugby pitch in his first season in Wigan’s first-team squad.

The 21-year-old with the strangely familiar mannerisms on the field was, at first, given the potentially daunting responsibility of standing in for Sam Tomkins whilst the returned prodigal regained full fitness.

If that amounts to throwing him in at the deep end, then it is not dissimilar to what Shaun Wane has done successfully with other youthful talents, like George Williams and Tomkins himself.

Besides, it didn’t seem like sudden promotion to Tierney, every twist and turn of whose career will inevitably see him flagged up as the son of Jason Robinson. (I’ve delayed it until the fourth paragraph, which I don’t reckon is bad).

‘I’ve been looking for a few years now for a chance to get a few games and show what I can do,’ he says, with a confidence reminiscent of…. Oh, you get the idea.
He believes that a loan spell at Workington Town last season did him nothing but good.

‘Just playing against men week after week was very good for me,’ he says. All the same, bridging the gap between that and, say, facing the Brisbane Broncos in the World Club Series, is a dizzying prospect.

The individual he identifies as the biggest help to him in making that transition, is that same Sam Tomkins whose place he kept warm in the early stages of the year.

‘Sam gives me a lot of help,’ he says. ‘We’re always chatting about stuff and going through it on video.’

The team video session after the 42-12 thrashing by Brisbane was not such relaxed viewing.

‘It was a shame, because we just didn’t do ourselves justice that day.’

There are respects in which Tierney is more mature than the average player of his age. He already runs his own clothing company, called Fizzle and specialising in leisure wear.

‘It’s quite time-consuming, but if you do nothing but rugby you can get a bit bogged down,’ he says. And he doesn’t just handle the business and marketing side; he is sufficiently hands-on to do the stitching and printing.

There is another sporting focus in the Tierney household as well. His step-dad, Phil, is a Football League referee, who has progressed as far as the Championship and hopes to make it into the Premier League.

Despite the glamour and hype that brings him into indirect contact with, it has always been Rugby League for Tierney. ‘I’m not really interested in football,’ he says.

One thing he is very clear about, though, is that his success will depend on his own efforts – not on having a famous dad. That is neither an advantage nor a disadvantage, he insists.

‘It makes no difference to me either way. I’m my own player when I get on the rugby field.

But, surely, a few words of advice wouldn’t come amiss. ‘I get all the advice I need from Wigan,’ he says firmly.

With his quick feet, low running style and dash of attitude, he reminds me of another young man many years ago, who could also be a little uncomfortable in an interview situation.

I’m blowed if I can remember his name, though.