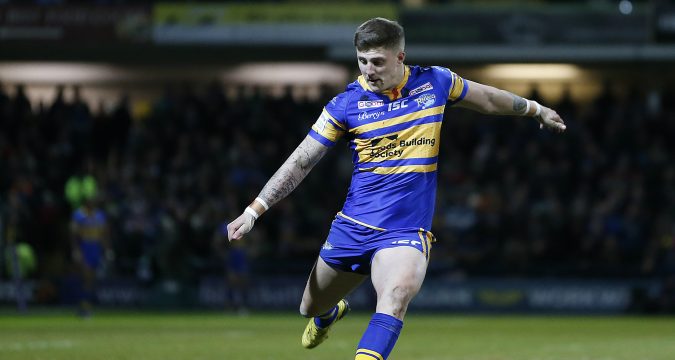 It hasn’t been an easy season for Leeds Rhinos star Liam Sutcliffe.

After returning from a seven-month injury in pre-season, the 21-year-old was thrown into the limelight at Headingley as he was tasked with filling the boots of Leeds’ legendary leader Kevin Sinfield for the club’s defence of the treble.

If that wasn’t a daunting enough task, an injury to his commander-in-chief Danny McGuire during the opening 40 minutes of the season left Sutcliffe as the primary halfback in the team despite having just 62 games of first-grade experience under his belt.

Some would argue that trying to replicate the influence of Sinfield and McGuire is impossible for anyone, yet alone a youngster who himself is still finding his feet after a long-term injury.

But it hasn’t stopped the young star come in for criticism, with many pointing the finger at Sutcliffe for Leeds’ poor start to the season.

By his own admission, Sutcliffe hasn’t produced the level of performances he would have liked, but he is confident that he is making strides forward in his development.

“I’m not where I want to be,” said Sutcliffe. “But in a team sport it’s about how everyone is performing, so it’s been a tough one for everyone so far this year. Everyone is still confident in their ability and my personal ability and we know we will come good at some point this season.

“At the start of the year I was wanting to get a few minutes under my belt and work my way back into it. I thought I’d have Danny (McGuire) there and have his experience to control games and organise things, and I would learn on the back of playing games with him. But then he obviously got injured so it wasn’t ideal.

“I think at first I didn’t know what to do. But the more experience of not having Danny in there, and having Jordan (Lilley) or Rob Burrow, you learn different things about yourself and how you can prepare to go into the game.”

Having to organise a team that has achieved so much is a daunting task. “But that’s always the challenge of being a halfback,” Sutcliffe said. “I need to try and get that into my game because I’ve not grown up having to have that side of my game. But that’s what comes with the more games you play at halfback, the more experience you get the better you become at organising things. Hopefully I can keep learning things from Rob Burrow and Danny McGuire in training and I can start to pick up from that.”

Despite Leeds’ gruelling start, Sutcliffe admitted that he is still fulfilling his dream.

“It’s not gone how we’d have liked it to go, but I’m still representing Leeds and it’s an honour every time to step out at Headingley or wherever with the Leeds jersey on. But now we want to win and represent the jersey well.”