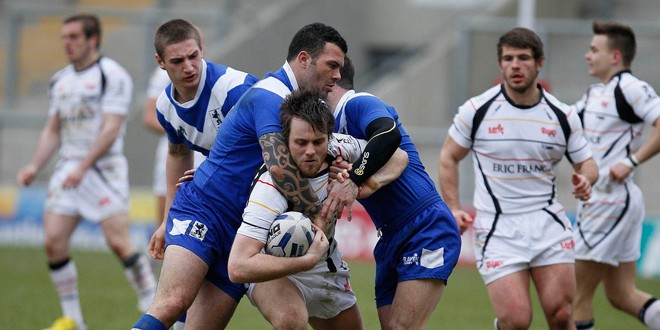 Swinton Lions and North Wales Crusaders will meet in the final of the iPro Sport Cup on Saturday 23 May at Blackpool FC’s Bloomfield Road stadium after both sides defeated their rivals in the semi-finals of the competition this week.

Jordan Meads was the Thunder star, with three touchdowns, alongside tries from Charlie Wabo and Louis Sheriff and four goals from Matty Beharell.

The Lions led 18-16 at half-time with tries from Jordan James, Atkin and Ritchie Hawkyard, with the Thunder replying with two tries from Meads and one from Sheriff.

The Lions pulled away in the second half, however, and were deserved winners in front of a crowd of 351 spectators.
The following night Oldham and North Wales Crusaders fought out a much closer tie, with the Crusaders eventually triumphing 16-18 in front of 444 spectators, after they had been 10-6 down at half-time.

The Crusaders scored three tries from Rob Massam, Ryan Duffy and Jamie Dallimore, with Tommy Johnson converting all three.
Oldham scored tries from George Tyson and a late one from Danny Langtree, with Lewis Palfrey adding both conversions and two penalties.
The final of the iPro Sport Cup will be the opening game in the Summer Bash weekend at Blackpool.

Last Friday the two finalists met in the opening league game of rthe season at Sedgley Park, battling to a 14-14 draw.

Reports from both games will feature in next Monday’s Rugby League Express.