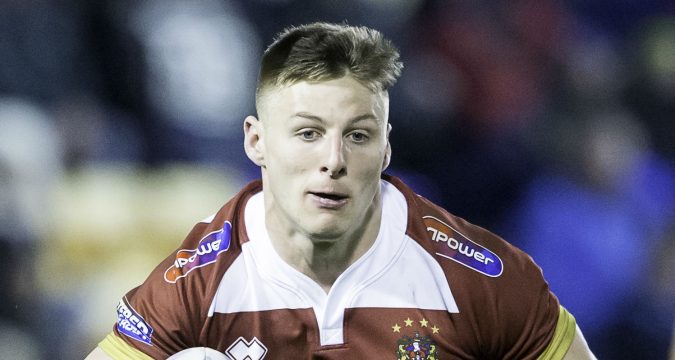 TOM DAVIES is living the dream, sixteen months after a nightmare injury threatened to finish his Rugby League career.

The 23-year-old England Knight is currently rampaging down the wing and scoring tries for fun with Catalans Dragons, which is a far cry from his last game for former club Wigan Warriors, which ended with him being stretchered from the pitch with his left leg shattered and his foot facing in the opposite direction.

Staring at a hospital ward ceiling late at night, following surgery to repair that triple fracture and ankle dislocation, Davies could never have dreamt of where and when he would return to the game.

“There was a point where I thought I’d never play again, but never in a million years did I think my next game of Rugby League would see me lining up for Catalans Dragons alongside Israel Folau,” says Davies.

A close-season switch on a two-year deal in Perpignan came as a surprise to the then 21-year old rising star of his hometown club. But an even bigger shock was to come when he discovered who his centre partner would be.

Davies said: “It’s a massive privilege for me to be playing alongside a player who has had so much history and success in the game.

“Israel has been at the very top in both League and Union and what we saw against Castleford is that he is still one of the best now. He’s a freak of an athlete who’s got all the skills, with the offloads and fends, and I’m very lucky to be on his wing.

“I’m hoping we’re going to score a lot of tries together.”

Davies doesn’t mind being in the shadow of Folau, and is happy to play the supporting role.

He adds: “I’ll give him as much room as he wants to do his stuff and just stay on the outside and hopefully pick up anything he can put my way.

“He’s weighing in at 106 kilograms but he can take off like a high-jumper; he’s built like a sprinter but he can push people off like a weightlifter. He is the full package. The main thing for me is to read him as well as I can and hopefully build up some kind of partnership.

“He’s a really great lad too and I think that gets missed sometimes. He’s got such a huge media profile but he’s genuinely one of the most down to earth and kind people you will ever meet.

“He’s very easy to get along with and hopefully, throughout this year, I can build some form of friendship with him both on and off the pitch.”

Davies is delighted to have resumed his career, despite a setback on the first outing of his return. Five tries in his first two matches have alerted the attention of England coach Shaun Wane, Davies’ former mentor at the DW Stadium.

And the flying Dragon couldn’t be happier.

“Everything’s gone perfectly, apart from the first result against Saints,” he adds.

“The ankle feels good, with the four-month break it has had the chance to fully heal and even though it would have been ready in March there was a chance that I might play one week and then need a week off because the injury would need monitoring.

“I’m not missing any training sessions now and I’m good to go if and when I am needed for games.

“I’ll admit I was a little bit nervous in that first game against St Helens, not so much about my ankle but more about whether or not I could still play the way I used to.

“I wasn’t too bothered about getting injured again; it’s part of the game and you can’t prevent it. The main thing for me was if I was still good enough to do a job for the team.

“The plan was to keep it basic and simple, be strong in defence and make sure your skills are good, while trying to take in as many carries as you can to share the workload. I did feel a bit rusty with some things, but it was a good hit out, although the scoreline obviously went against us quite badly.

“I still enjoyed the experience; getting that matchday feeling back is incredible and I’ve missed it so much.

Saints tore the Dragons apart 34-6 and the pre-season confidence in such a star-studded Catalans squad took a serious knock.

Davies added: “It was a real setback and we knew we had to change a lot of things, we knew we hadn’t given our best and that was the most annoying thing.

“To come back and beat a good Castleford side was very satisfying (the Dragons recovered from 14-0 down to win 14-40). There wasn’t one bad player on the team, the forwards smashed it down the middle, every single one of the outside backs was looking for work and our halves controlled the game.

“We had a bit of a scare in the first 15 minutes when Castleford scored those two tries, but there’s a lot of experience in this Dragons team and all the talk on the pitch was how we were going to get back on top in the game.

“We’re pretty unique in that we have such great experience from French, English, Aussies and other overseas players. The senior ones said ‘look, we know what we can do’ and once we got back to our D (defence) and the grind of the game we were fine.

“Things just started to click from then on and hopefully over the next few weeks we can show Super League what we can do and put some good performances on for our supporters.

“The scoreline against Wakefield (58-0) was an indication of what we are capable of, but Steve McNamara has made it very clear that improvements still need to be made.”

All the headlines have been about Folau, Davies and his England Knights team-mate Matt Whitley, who also scored a hat-trick against Wakefield, but Davies says it’s important that people recognise the effort being made in the middle of the pitch.

He singles out team-mate Ben Garcia, the French international being tipped as a future club and country skipper, who has moved from loose forward to fill in at hooker and prop in recent weeks.

“Ben is a phenomenal athlete who you can put anywhere and he’ll perform,” says Davies.

“He’s an effort player who goes at 100 per cent whether he’s tackling or carrying. When you put someone like him in the middle of the ruck it inspires everyone else, because we have to match that physicality and energy level. He’s one of those players who improves everyone around him.”

Five tries in two games for Davies is the pay-off for such midfield graft. Wigan supporters watching him on TV will recognise the powerful upright stance that carved out 32 tries in the Cherry and White.

“There’s not much more to me than getting the ball and pinning my ears back and going as hard as I can,” he insists.

“I had a very good coach back in the UK, Glenn Sweeney, who I’d been with since I was 16 at St Patrick’s.

“We used to do our own sessions on speed and power work, so I have a certain technique, but all that is automatic when you get the ball and you go as hard as you can for that line.”

Davies enjoyed Grand Final success with the Warriors in 2018, but he is setting his sights on the Challenge Cup this year. Most of the Catalans players have already tasted Wembley glory but not Tom – a rare thing for a former Wigan player.

He said: “I haven’t had my hands on the Challenge Cup; we got there in 2017 with Wigan but I rolled my ankle on the Thursday before the final so if there’s one thing I’d love to do it would be to lift that famous trophy.”

Davies is too young to remember Wigan’s glory years of the 80s and 90s and as a youngster he had set his hopes on tasting Wembley glory in other colours.

“Wigan have such an established history of winning the Cup but as a child I actually supported Leeds. I had a season ticket at Headingley with my dad. But while the Rhinos were winning Grand Finals almost every year, they could never seem to do it at Wembley.

“I remember one year my dad took me to the Cup Final and Leeds got battered by Warrington and I was so frustrated. How could we keep winning the Grand Final yet not win the Cup?”

So how did a young player born within a drop-kick of Central Park end up, albeit temporarily, a loyal Loiner?

He explained: “I took my ball home when I was younger because I didn’t get through the Wigan service area trials at about ten years old. I had a massive sulk after getting through every level and being rejected at the last stage.

“At the time my dad had taken me to watch a Great Britain under-21s game and the squad was full of Leeds players like Danny McGuire and Rob Burrow, who were just coming through.

“I was so fed up with Wigan I said I wanted to support Leeds, which didn’t go down well with my schoolmates, or my parents, but it gave me some of the best moments ever in the game.

“I used to sprint home from school at about 3.15pm on a Friday, get changed and set off for Leeds with my dad. It seems daft now, but we had some real quality time sitting in traffic on the M62 just having a laugh together.”

‘Having a laugh’ is important to Tom Davies; he grins through the most gruelling training sessions in 36-degrees heat at Stade Brutus, and he admits he can’t stop smiling.

“I’m probably the happiest I’ve ever been,” he says.

“The club, the Catalans players and staff have been fantastic and we all get on so well. Bernard’s been amazing as an owner; he’s really looked after us.

“It’s a massively different lifestyle in France, but it hasn’t been difficult to settle in. The people are so relaxed and friendly and I’ve enjoyed every minute.

“To be able to get out at the Brutus in front of a crowd for the first time will be amazing so I can show the fans what I can do and give them my best performance.”

The people of Perpignan may have accepted yet another adopted son from Wigan with open arms, but Davies will never forget his early experiences of the ‘hospitality’ of French supporters.

“I’ve not had the best of memories at the stadium; the amount of abuse I used to get coming here as a Wigan player was incredible. It’s a good job I couldn’t understand half of the words they were throwing at me.

“The fans are so passionate here and they let you know about it. Even at Academy level with Wigan, when we played warm-up games at the Brutus, they’d be chucking their fag-ends at me, so I’m glad they will be on my side from now on.”

And if Davies can continue to show such promise in his partnership with Israel Folau, the fans will no doubt be lighting cigars for him.