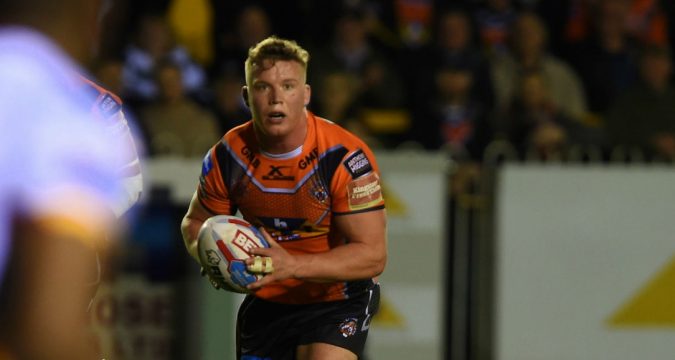 Castleford forward Adam Milner has insisted it would be “absolutely massive” for Castleford to finish top for the first time in their history as they close in on the feat tonight.

The Tigers know anything other than defeat guarantees a first-ever League Leaders’ Shield – and as a local lad and experienced some tough times with Castleford, Milner admits he is fully appreciative of a trophy some have talked down the importance of.

He said: “It would be absolutely massive to win the league.

“We’d be the first Castleford team to have done that and from when I debuted here in 2010 when there were some real tough times, it’s an incredible transformation to be so close to winning some silverware. We owe the fans for sticking by us and it would be a brilliant thing to do to finish top and win that league.

“Finishing top would be massive given how we’d be the first team in this club’s history to do it – we’d become part of history. That’s something I’d special for the rest of my career and while people knock it, we’re fully aware of how big it is. It gives us a home semi-final too and we’ve been pretty outstanding at home this year which should make us confident. After that, who knows what can happen on a one-off night at Old Trafford.”

Meanwhile, Milner is hopeful that the form of his career could yet catapult him into England contention for this year’s World Cup. He is hopeful that he can follow in the footsteps of Tigers team-mates Michael Shenton, Greg Eden and Paul McShane by catching Wayne Bennett’s eye.

He said: “It’s a once in a lifetime opportunity and it’s definitely an ambition of mine.

“I think it’s the best I’ve played, yeah. I’ve really thrived in the position I’ve been given in the squad; I understand my role and I think everyone around me knows what I’m about and what I can offer. It’s okay me sat here saying I should be this and that though, it’s down to my performances and I’ve got to make sure my actions get me in.

“There’s six games left of the Super 8s and I want to have a good performance in every one of them and force my way into England contention if that’s still at all possible.”