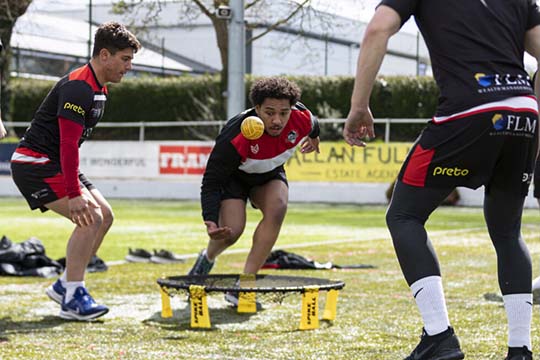 Jacob Ogden is dreaming of making his World Cup debut later this year with Jamaica and hopes he can prove his international credentials by making his mark on the Broncos’ Betfred Championship campaign.

The 22-year-old featured on the bench in the Broncos’ first fixture of the season at Halifax and hopes to be involved in a greater capacity on Saturday as they face his former club Sheffield Eagles away from home (KO 1pm).\

Ogden made 15 appearances for the Eagles on loan from the Broncos last season and furthered his experience via temporary stints with League 1 sides Coventry Bears and London Skolars.

The Broncos’ academy graduate has represented Jamaica twice. But he is hungry for more international glory and hopes this autumn’s tournament can inspire more people of Jamaican ethnicity to make Rugby League their sport of choice.

“Across the UK, there are huge Jamaican communities – some of whom have an interest in Rugby League so we’re rarely short of support,” said Ogden. “In Jamaica, the sport is still growing with a small domestic league but qualifying for this year’s World Cup by beating the United States was a huge moment.

“I’m working extremely hard to get into the squad and am putting 100 per cent into my training with the Broncos to give myself the best chance possible in being selected. The World Cup is a great chance for Jamaica to announce itself on the international stage, and I would love to be part of that experience.”

Closer to his current home, the Northampton-born centre revealed he is pleased to have committed his future to the Broncos during winter.

Ogden feels his experience of playing with the Eagles, Bears and Skolars helped take his game to the next level.

He said: “My time away from the Broncos on loan was excellent for my development. Sometimes it is hard for players that come straight out of the academy to experience first-team rugby at a professional club.

“Going out on loan turned me into a man. I was getting hit harder and playing with greater intensity, it was a brilliant experience. I am very happy being in London, I want to stay down here longer and play regularly. I enjoy putting on the jersey and being part of everyone associated with the club from my teammates to coaches and the fanbase.”

The Broncos enter Saturday’s game hoping to build on last weekend’s 38-24 Betfred Championship win over Oldham. But the Eagles enter the game in rich form too having already beaten Bradford Bulls and York City Knights this season.

“It will be a good game,” said Ogden. “We’ve both got strong teams so it will definitely be competitive.

“I’ve played alongside a lot of the players that will feature in the Sheffield team so we can hopefully use that knowledge. We cannot expect them to roll over, they’ve proven already this season they’re a capable squad, so we’ll have to be on our best game from minute one.”