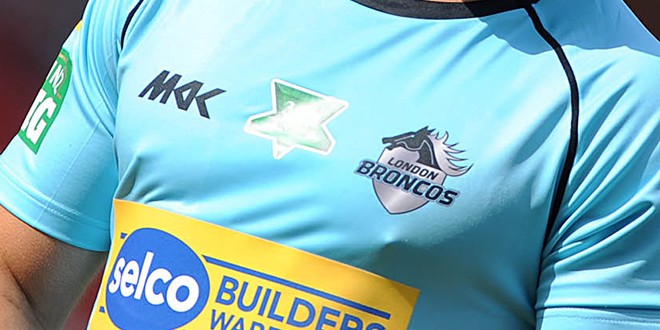 London Broncos chief executive Gus Mackay insists that Tony Rea’s side will be competitive in 2014, despite having just twelve players signed with nine weeks until the start of the season.
The Broncos were saved from administration when they agreed a two-year ground share with Barnet FC on Friday.

The announcement was the culmination of six months of talks amid speculation that the Broncos’ long-term Chairman and benefactor David Hughes was looking to wind down his commitment to the club.

Hughes is set to remain in charge of the Londoners during the 2014 season, with Barnet Chairman Tony Kleanthous expected to assume control for 2015.

In addition to playing their home games at The Hive, the Broncos will switch their training to Barnet’s former ground, Underhill.

But on the field the Broncos are some way behind their Super League rivals, with 16 players having left the club since the end of last season, and just a dozen predominantly home-grown players currently signed.

They include England Knights winger Keiran Dixon, who could miss much of the new season with a serious knee injury sustained against Samoa at Salford.

Australian Rea, who will be joined by new assistant coach Sean Long, has been working on a potential list of targets for several weeks.

That is thought to include Bradford players such as Jarrod Sammut, along with a number of World Cup stars who would be able to obtain visas for this country.

The club is also expected to speak to Wigan, St Helens, Salford and Widnes about possible loan recruits, with Wigan thought to be ready to loan up to eight of their younger players.

Mackay believes there are enough available players of sufficient quality to make an impact in Super League next year.

“It’s a challenge but it’s not impossible,” Mackey said.

“In the background before we’d signed the papers at Barnet, there were a lot of conversations taking place. We were just waiting to conclude the deal.

“It’s not like we’re just coming into the market now. We’ve been looking at players for a while, but we just weren’t able to commit.

“Tony Rea will now be very much onto that in the next week or so. Hopefully we will have some signatures on contracts shortly.

“We’ve got about a dozen players signed at the moment, and a number of others ready to sign contracts.

“Out of all this a lot of good can come.

“We know we’ve missed out on some big names that we would probably have liked, but it also presents an opportunity to build a side around hungry players.

“I suppose that’s the challenge and the exciting part – that players who come here will want to get on this journey with us.

The Broncos will not be granted any dispensation on the overseas quota, despite a plea to other clubs.

Instead they will be forced to play under the same rules as the rest of the sides in Super League in a season in which the bottom two will be relegated.

Despite the danger of relegation, Mackay still believes that the club can look forward to a brighter future.

“I am very excited about it,” he added.

“It could be the best thing for Rugby League in London because the club seems to have been around every available ground possible.

“Now we have a place that is fit for Rugby League in terms of its demographic and transport links. But more than that we have a partner who wants us to be there, and wants to be part of our journey.”

Mackay confirmed to League Express that the players and other staff will be paid all that they are owed, and that he is hoping to stay with the club himself.

“All those outstanding payments will be resolved,” said Mackay.

“None of us were paid last month, and not to get your salaries is hard. But we can get the payments made before Christmas.

“And I have no plans to move elsewhere.”

And Mackay confirmed that Kleanthous will have a growing role with the Broncos.

“Tony is a man with vision and he is passionate; his goal is to have a 10,000-seater stadium.

“Our focus was to avoid administration, and to get the best facilities we have had for Rugby League in London.

“In the long term, it’s a rental deal, but structured so that there is a massive interest for Tony to put people through the gate. If he likes the business model David (Hughes) would welcome him to get involved. The cost base has been reduced significantly so that we will be living within our means.

“It will be a very streamlined operation, because of the cost base. The support staff and the matchday operational functions will be picked up by The Hive, where the resources are already in place.

“I believe we will have a stable club in a good facility with excellent transport links. You can be in Green Park in London, and then, via the Jubilee Line, in your seat at The Hive within 30 minutes.”