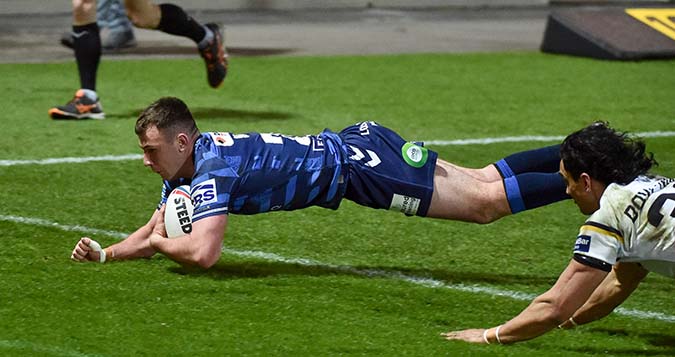 WIGAN’s Harry Smith hopes the security provided by a new contract which runs until the end of 2024 will help him establish himself as a first-team regular.

The highly-rated 21-year-old halfback already has 22 appearances to his name, including all four matches so far this season.

Widnes-born Smith has been with the club since he was 14, when he joined from Halton Farnworth Hornets (he also played for Wigan St Judes), winning three Grand Finals with the Under 19s, who he captained, and skippering England at Academy level.

He played for England Knights against Jamaica in October 2019, six weeks after a try-scoring Wigan debut in the 46-12 home win over Catalans. Earlier that year, he had a loan spell at Swinton.

Smith scored four times in 17 matches as Wigan won the League Leaders’ Shield last season (he also landed two field-goals), and got his sixth try for the club in the 26-0 Challenge Cup third-round win at York earlier this month.

“I’ve worked hard to get to where I am now, and I know there’s a lot more hard work ahead,” he said.

“Wigan are renowned for their Academy set-up, and I feel like I have benefitted from all the coaching I’ve had and the experience Ive gained from playing so many times at Under 19 level.

“Adrian Lam was great with me last year, when I feel I really came on, and I think I had a good pre-season in terms of developing physically.

“Now I’ve got this long-term contract, I can really focus on learning from all the coaches and experienced players there at this club to improve my game.

“There is loads of competition here, and I know it won’t be easy, but I really want to establish myself as a first-team regular.”