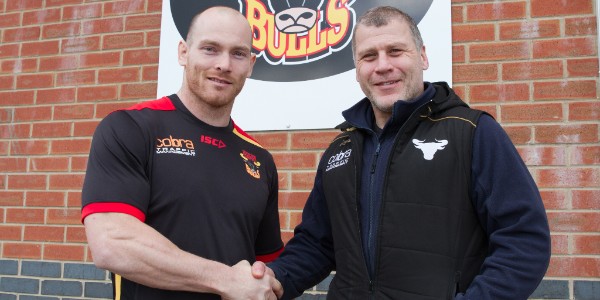 Bradford Bulls have finalised a deal to keep Rhys Lovegrove at the club on a permanent basis.

Lovegrove has been on a one-month loan with the Bulls, but has now done enough to earn a two-year contract with the club.

The Australian adds his Super League experience to the Bulls team following a lengthy stint with Hull KR.

“It’s great to be a Bulls player now,” said Lovegrove.

“I’ve had the opportunity over the last few weeks to get some minutes under my belt. I’ve tried to do the job that Jimmy wanted me to do and I think I’ve done it well.

“It is a big squad and an established team and I’ve had to fight my way into the side to show what I can do.

“There is a massive battle for places in the squad. I’m squad number 35, so that shows you how big the squad is and it’s really competitive.

“Even in training we are having full-unopposed games, 13-on-13. They are good opportunities to impress and battle for your spot.

“Now I’ve been given a contract I hope I can improve and help the team even more, and hopefully we can keep getting results throughout the year.

“The momentum has been really good at the start of the season.

“It is important to chalk off the wins, especially the difficult away wins, like Whitehaven a few weeks ago. Those are the types of games on difficult pitches, which can trip you up in a season.”

Head coach Jimmy Lowes added: “Rhys adds to the battle for places amongst the squad and brings a lot of experience to the pack.
“He’s impressed in the games he’s played and I’m pleased to have him on board.”