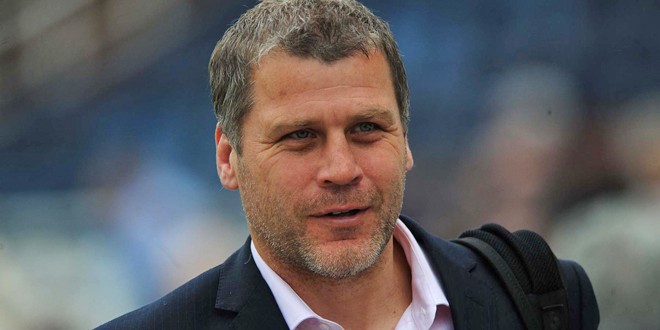 James Lowes has been given the task of reviving the fortunes of his old club after being appointed as Bradford Bulls’ new head coach.

The 44-year-old former Bradford and Great Britain hooker has left his role as head coach of Leeds Carnegie rugby union team to succeed Francis Cummins, who was sacked just over a week ago by the relegation-threatened First Utility Super League club.

The former Warrington Wolves head coach, who ended a successful eight-year stay at Odsal on a high by helping them complete the league and cup double in 2003, spoke of his delight at returning to the 13-man code after being unveiled at a press conference at the Provident Stadium.

“I’m a Rugby League man,” said Lowes. “I’ve thoroughly enjoyed my time with Leeds Carnegie but, when this opportunity arose, there is no way I couldn’t go for it.

“With my history at this club, I just felt it would be wrong not to apply.

“I always aspired to come back, I didn’t reckon it would happen this quickly.”

Lowes, who was named man of the match in Bradford’s 2002 World Club Challenge triumph over Newcastle Knights and scored 84 tries in 205 appearances for the club, has been given a two-and-a-half-year contract that runs to the end of 2016.

Lowes will hold his first training session on Wednesday ahead of his first game at Warrington on Sunday.

He insisted he has a plan B in the event of relegation and admits that will almost inevitably mean the departure of some players.

“If players get opportunities to move, then they’ve got to make a decision,” Lowes said. “That’s part of the game, you’ve just got to deal with it and move on.

“Hopefully the core of this team will stay with us no matter what. It’s inevitable if we get relegated that players will want to stay in Super League.

“We’ll try our best to get quality players to come in. We’ve got to get ready for both with a plan A and a plan B.”

Lowes, who was right-hand man to England boss McNamara up to 12 months ago, says he has an assistant in mind but will not be in a position to make an appointment before Sunday’s game