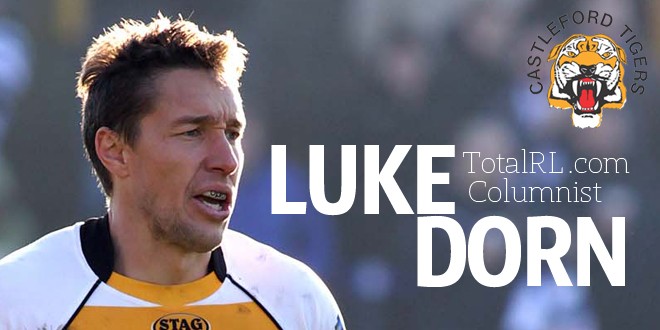 Castleford Tigers utility back Luke Dorn, 31, has joined the Total Rugby League team as a columnist. Check back every Thursday to read his thoughts on the game’s hot topics…

Our win against Wigan on Sunday was nothing short of incredible, and the feeling still hasn’t worn off. It wasn’t just the result or how it finished, but the game as a whole was amazing.
We led for much of the match until Josh Charnley scored a try and Matty Smith slotted a drop-goal. That was in the 79th minute, but we were just trying to get the ball back, we felt we deserved another shot because we were the better team on the day and thankfully we regathered the short kick-off.

The original plan was to go for the one-pointer to tie it up but they were looking a bit thin so we had a go. I could see we had space out there and I threw the dummy and it worked out perfectly. I couldn’t quite believe that I got over for the try, it was an incredible feeling. It’s probably the best feeling I’ve had playing footy. I was talking to my wife about it and saying as a kid, growing up, I remember playing outside the front of my house by myself and winning thousands of games on the bell, chipping and chasing to score on the hooter. That’s the sort of thing you dream about doing, scoring a winning try in the last seconds of the game and it certainly lived up to my expectations. In the changing rooms after, we were more relieved and gratified than anything. We thought we deserved to win the game by a bit more, we probably didn’t deserve to be in that close a game at the end, but we got the result. As a team we’re very comfortable with who we are, we know that what we’ve achieved so far is through our hard work and dedication to our game plan, the hard work on the field, off the pitch, and in pre-season – everything is built into it and we’re just getting our jobs done individually and collectively, and that’s what you want.

This Sunday we’re playing Hull FC at home and we are under no illusions – it’s going to be a really tough game. They are in decent form and have some very good players across the park. We know we’ve got to be on it defensively and if we can defend well we’re confident enough that we’ll give ourselves a crack at winning the game.

The career of a Rugby League player is fascinating to me, and I often think loyalty in our sport is not as crystal clear as we think it is. Staying at one club throughout your career is a great thing, I wish we could all stay at one club, Steve Menzies did it at Manly, he was a one club man, and it looks like Kevin Sinfield will do it at Leeds. I think it’s fantastic, it shows a lot of love for where you are and the people around you and vice versa for the club towards you. The reality, though, is that isn’t how it always works – guys move around and players are wanted elsewhere or not required at their respective clubs. It’s a hard one, we all talk about loyalty and, as a fan of football and NFL teams, I know how it feels. I don’t want any players to leave, but at the end of the day, your career is a short one and it can be over before you know it.

If you’re lucky you might get a good ten years out of it, but I’ve played with and against many players who have lasted a year, two years or just a few games. It’s easy to think you’ll have that magical 15-year career but whether it be through injury, form, or a player beneath you who takes your position, it can end very suddenly. And a lot of the time there is nowhere else to go. The fact is you have to make hay while the sun shines. We all fantasise that we’re going to have the Steve Menzies career or the Jamie Peacock career, being able to play forever, but the reality is we’re probably not going to get that. I’ve been fortunate enough to play for a long time but I’ve got guys I’ve played with that haven’t, and guys I played with at London last year that have had their careers pulled out from under them through circumstances they can’t control. It can come upon you in the space of months really, the end of your career. And if you are not trained in another field or area of expertise you’ve got to start from the bottom like someone leaving school.

It’s up to us as players, our families, the clubs, and agents, to make sure that we are fully prepared for life after football.
I think more can be done, more needs to be done, because there are some great players who have ended up with nothing to their name. It’s very sad and we’ve got to plan better. Clubs move on so fast because it’s such a results-based business these days, you’ve got to be winning and you can’t look back on the past with too much fondness, obviously you want to give players the send-off and respect they deserve when they finish but you can’t hang onto it for too long because you need to move on to get that next crop of players through and win those next games. You can’t hang around and wait, it’s cut throat, once you’re done you’re done, and you’re a long time retired as the saying goes.

I’ve been told by many older players I’ve to play as long as I can because once it’s done it’s done, it’s a great game and a great life, but we’ve got a lot to learn about that side of it. We’ve all got to be better as a sport helping people post-football because realistically we are not earning massive amounts of money and once you finish playing you’ll be OK if you’ve managed your finances well but other than that you’ve got to start at the bottom.

It’s all about education and making sure we’re all good at what we do and making sure the kids know that coming through they need to be prepared early on, they can’t wait until five years into their careers to get something in place to move on to, they’ve got to start young and that’s a responsibility of the club, the player and his family to make sure from the outset we’re all ready for it, because a few of my great friends have had to retire in the last year and some of them have had to go back to nothing, some of them are waiting and waiting and if no club comes up that’s it they have to go back and start again and find a job. If you’re not well connected, or focused on what you want to do, it’s a scary time and you can see why players and families have tough times in that transitional year post playing.

My plans for the future

I’d like to stay in the game when I finish, I suppose a lot of people would. Clearly there’s a limited amount of jobs within the game, though. There’s a few ideas, a few things I want to do, and I’m putting them into place as we speak so in a few years when it’s time to lace up the boots for the last time I should be ready.
I’m not sure how you decide when enough is enough. Everyone I’ve spoken to says you know when it’s time, it’s either a physical thing when you feel you’re no longer up to it, or mentally when you don’t think you can get through it. Pre-seasons are tough at the best of times and when you’re getting older they can really take it out of your body so you’ve got to have that desire and that drive to keep on playing. Once that diminishes then that’s it.