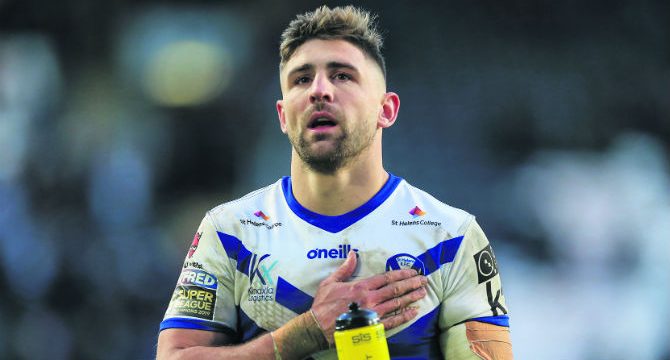 Ten years ago, on 18 February 2011, St Helens gave a debut to a teenaged winger who came off the bench but wasn’t able to touch down, as the game was dominated by another young St Helens player, Kyle Eastmond, who scored two tries and played superbly as Saints blasted Salford to win 56-22.

St Helens’ starting wingers that day were Ade Gardner and Jamie Foster, but Tommy Makinson clearly must have made an impact for St Helens’ coach Royce Simmons, who had only taken over at the start of that season.

Makinson would go on to make 16 starting appearances and six off the bench during that season, becoming a regular Saints star and ultimately going on to make 224 Super League appearances in ten seasons. And after 2011 he would never again be selected on the bench, instead enjoying nine successive seasons of starting in every game he played, while scoring some trademark spectacular tries.

On the other hand, back in those days rumours were starting to surface about Eastmond possibly jumping ship to rugby union. The following week against Warrington he was roundly booed by St Helens fans and a week later he announced that he would be joining Bath at the end of the season.

Makinson, however, went from strength to strength, scoring his first try for St Helens against Wakefield on 15 April and enjoying a career that would bring international honours for England in 2018 as well as the Golden Boot for his performances.

And now Saints will take on Leigh Centurions this Saturday evening at the Totally Wicked Stadium in Makinson’s official testimonial game, which kicks off at 6.00pm.

And Makinson is delighted with the cooperation shown to him by the Centurions.

“Leigh have been fantastic in helping to organise this game,” says Makinson.

“They were a local team, so there are no travel issues, and because they are newcomers in Super League they were really keen to play us.

“I want to take this chance to thank Leigh, and in particular Derek Beaumont and all the lads down there.

Unfortunately there will be no fans at the game, but it will go out via live stream on the OurLeague App, and it will cost £5 to watch it, so I hope as many fans as possible will tune in.”

Meanwhile Makinson can reflect on the changes that Rugby League players have experienced in the years since he made his debut.

“Back then there was no GPS, no data recording every move we make, and training sometimes consisted of flogging the players to get them fit.

“But now, with advances in technology, there is so much scientific data and facts that back it up and all clubs train much smarter.

“I can only speak from our point of view, but nowadays you know what you’re doing and there is hard evidence behind it. We are not running up hills just because the coaching staff want to flog us. The game is getting fitter, faster and It is totally different now to what it was early in my career.

“And given all that, I still struggle to get my head around why we can’t get this game the recognition it deserves.

“The skill and character Rugby League demands is not appreciated. There is no hiding place on the field and you can’t be the weak link in any team. The game is too fast and it will find you out.

“Fortunately for me, although I made my debut as a teenager I believe I’m still at my peak and I hope to carry on for a long time.”