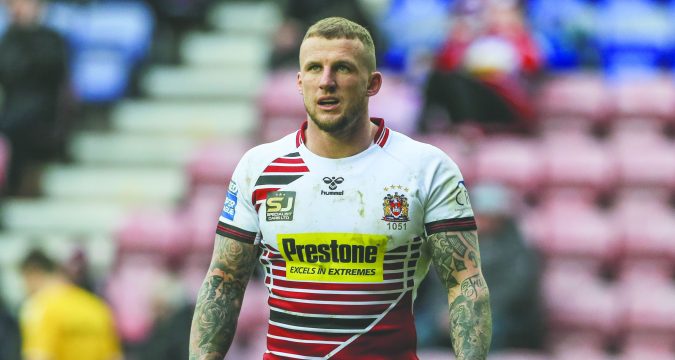 Dom Manfredi has welcomed the news that fellow Wigan winger Liam Marshall is ahead of schedule in his recovery from an anterior cruciate ligament (ACL) injury.

Marshall suffered the injury in September, which usually comes with a nine to 12-month recovery period.

That would have seen the 24-year-old miss the majority of the coming season, but coach Adrian Lam last week reported he has made rapid progress in his rehab.

Manfredi had to undergo three knee reconstructions in the space of just five years and knows exactly what Marshall has had to deal with.

“I’ve spoken to him a few times because he knows what I’ve been through and we’re pretty close.

“He’s a lively character and deals with things his own way – he likes a laugh and a joke. “Everyone has their own way of dealing with it.”

Manfredi has been recounting his own experiences as part of Wigan’s ‘Warriors Unite’ health and wellbeing initiative aimed at helping fans through any lockdown challenges.

The 27-year-old fronted a Zoom call last week for adult males, with other squad members offering support to different members of the supporter base.

“It was good, there were quite a few people getting involved,” Manfredi said.

“With everything that’s happening with lockdown, people haven’t been able to socialise, and some are struggling.

“It was good to talk to them on Zoom and people warmed up to it and got more and more involved.

“It’s been pretty tough not being able to go out and enjoy things you normally would, although we’re lucky in that we can train through it and have reasonably normal days.

“People haven’t been getting out of the house and some haven’t got others they can rely on, so this programme at least means they can speak to somebody virtually.

“You never know what people are going through.

“Just saying hello or greeting someone with a smile can have a big impact.

“You don’t know what’s going on in people’s heads or their circumstances.”

Part of the call saw Manfredi explain how he overcame the lows of having to recover from three serious injuries during what should have been the prime of his career.

“We had a bit of a Q&A and there were some good questions about how I coped with my injuries,” he explained.

“At one time I didn’t leave the house for three months and didn’t want to talk or get out of bed.

“It was after the second of my two back-to-back ACLs.

“I didn’t know if I’d play again, and it was during the off-season, so everyone else was either on holiday or playing at the World Cup.

“I was sat at home and didn’t leave the house for three months, which was my darkest time.

“My mum came round once a day to check that I was okay, but I was struggling.

“I just thought I wasn’t achieving anything or getting anywhere and knew I needed to start doing something.

“It was just little tasks at first, but that grew and grew and before I knew it I was back in training.

“But I started setting goals, getting some small things done and then rewarding myself when I made some progress. I kept going until I got back to normal.

“I’ve been to some tough places but I knew then I could get back to where I was.

“No matter who you are or what you’ve done in life, people can be in dark places, it’s how you get out of them and come back from them.”

Manfredi also missed last year’s Grand Final with a comparatively minor knee issue, but he is now ready to make up for lost time.

“That was another tough blow to add to the collection, but I’m fully fit now and training well,” he added.

“The boys are looking sharp and we’ve got a great team.

“It’s probably the most talented squad I’ve been part of and that’s saying something – I’m excited to see where we can go.”