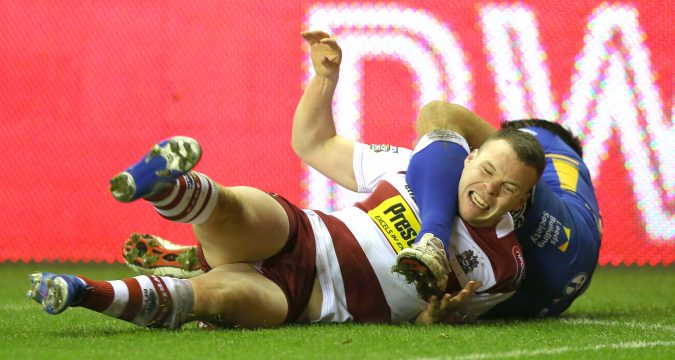 Wigan winger Liam Marshall says he’s looking forward to “making more memories in cherry and white” after agreeing a contract extension.
The 23-year-old’s new deal runs until the end of 2023, with a one-year extension option.
It rewards a bright start to the season, which has brought five tries in seven appearances, including a hat-trick against Huddersfield, and a call-up to the England Knights squad.
Wigan-born Marshall, who made his debut in 2017 having spent the previous season on loan at Swinton, scored 17 times in 24 matches in al competitions last season.
He has 62 tries in 77 appearances overall. In his rookie season in 2017 he was the Albert Goldthorpe Rookie of the Year.
“I’m really excited to commit my future to Wigan Warriors,” he said.
“I feel at home here and I’ve already been lucky enough to have made plenty of memories in a cherry and white shirt. Hopefully there are many more to come.
“I’m enjoying my rugby and I’m learning a lot from Adrian (Lam) and the coaching staff and I’m determined to keep on improving and build on the last few seasons.”
Head coach Lam said: “At 23, Liam’s best years as a player are yet to come and we’re excited for him to realise his full potential.
“He’s started the season extremely well, and with more hard work, I don’t think he’s too far off the senior England squad.
“He’s a great finisher, one of the best that we have in Super League, and he has improved in his all-round game in recent seasons at some rate.”
Wigan’s executive director Kris Radlinski added: “We’re very happy Liam has committed his future to the club. He is a popular player amongst the squad and has progressed an enormous amount in the past couple of seasons.
“He is not only a fantastic Rugby League player, but also a wonderful character around the place.
“With this new contract in place, he can focus on his career.”