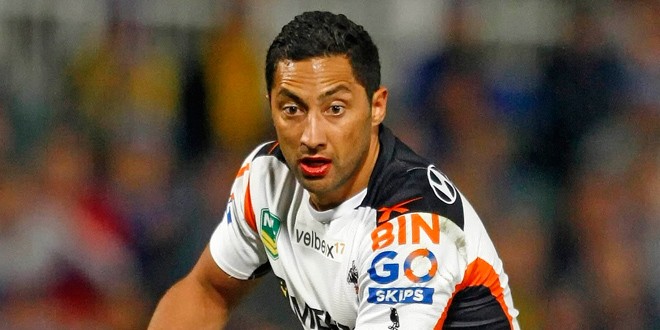 Wests Tigers gained a double over Melbourne Storm today at Mt Smart Stadium in Auckland, with a late Benji Marshall gaining an 11-10 victory in a game that was Storm coach Craig Bellamy’s 400th game in charge of the Victorian club. It was also Melbourne backrower Ryan Hoffman’s 250th game for the club.

It was the first game in a double header in Auckland, before the Warriors faced the Cowboys, and initially both teams made countless errors.

The Storm took an early lead with a Brodie Croft penalty on 17 minutes.

The first try came when Benji Marshall attempted a 4020 kick and Josh Addo-Carr attempted to stop the ball from going into touch by flicking it over his shoulder. The ball went straight to Tigers centre Esan Marsters who fed Josh Aloiai for the game’s first try. Tuimoala Lolohea hit the post with his conversion attempt but the Tigers were ahead 8-2.

The Storm took the lead just before the interval, however, when Billy Slater touched down a kick to the Tigers’ line by Cameron Munster, with Croft converting for an 8-4 lead. He then added a penalty on 57 minutes to increase the lead to six points.

But the Tigers responded when the Storm allowed the kick-off to bounce dead before Luke Brooks put Lawrence through a gap with a superb flicked pass. Lolohea converted to level the scores, before Marshall landed the crucial field-goal with seven minutes remaining.