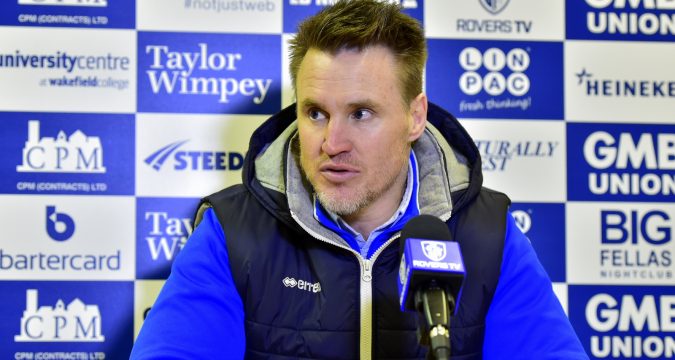 It’s incredible to think that when Halifax entertain Leeds on Sunday it will be the first meeting between the two sides in 15 years.

Halifax coach Richard Marshall was still playing back then. In fact, he has fond memories of this particular West Yorkshire derby.

Playing alongside the likes of Fereti Tuilagi, Gavin Clinch and Kelvin Skerrett, Marshall recalls one particular memory from a 13-6 defeat in 1998.

“I got sin-binned for fighting with Terry Newton,” he said.

The two clubs have gone in very different directions since then. In 2004, Leeds had won their first Grand Final. In that same year, Halifax came from behind to beat York City Knights in a play-off match where defeat would have left them in League 1.

Fax have stabilised since then, but have lingered in the second-tier for the last 15 years. Leeds, meanwhile, have become Super League’s most successful ever side.

“There was a great rivalry,” Marshall recalled.

“They’ve gone up in the world, they’ve been world champions, we’ve been punching away in the Championship. That’s the harsh reality.”

But Sunday will give Halifax fans just a small taste, a small flashback of yesteryear. They hope one they these fixtures will come around more regularly. For now, they are preparing to enjoy the occasion.

A minimum of 4,000 people are expected at The Shay. There are hopes they could attract their biggest crowd since the end of their Super League tenure.

Marshall is hoping that his side can put on a show.

“Let’s hope it’s a big crowd and put out a further statement that the clubs in the Championship are vibrant.

“We’ll be looking to maximise this game commercially. The office has been buzzing this week and everyone wants a piece of this game.

“But we want to give back to our fans. This day is for them. FaxTrust, one of our supporter groups, have raised £25,000 for our reserve grade this season. Without people like them and the LS28 Supporters Group, we would not be where we are on Sunday, playing against Leeds.

“We’ve got to make the game really exciting so people want to come back, but also competitive, we have to compete for everything, who has the best warm up, the best everything. If we do that we’ll be happy. If it’s enough to cause an upset, brilliant, but Leeds are a world class operation.

“It’s going to be very difficult to get the win but nothing is impossible.”