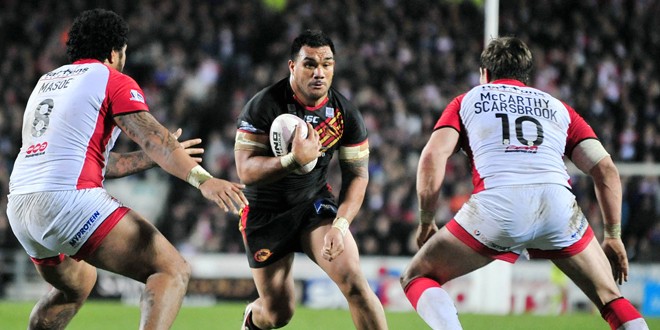 The first of the two Super League play-off semi-finals takes place tonight, as a Anglo-French affair between the sides finishing first and seventh on the Super League ladder will dictate the first side to advance to Old Trafford.

St Helens – who are well rested after their 41-0 victory against Castleford in week one of the play-offs – take on Catalan Dragons, who are on a roll after eliminating both Leeds and Huddersfield in their own back yards.

The Team News
The Saints are boosted by the return of Alex Walmsley ahead of the game, who is back after serving his suspension following a red card against Huddersfield last month. He replaces Matty Dawson in the squad, with the inclusion of Walmsley likely to be the only change the Saints make.

As for Catalan, coach Laurent Frayssinous has stuck with the men who defeated the Giants last weekend in West Yorkshire, with an unchanged 19-man squad making the trip across the Channel for the encounter.

The Prediction
The obvious favourites are the Saints – who are in good form after that 41-0 defeat of Castleford, as well as having not played for two weeks. But all the momentum is arguably with Catalan – and we can’t split them. Sorry! Who’s your money on? Let us know on Twitter or Facebook!