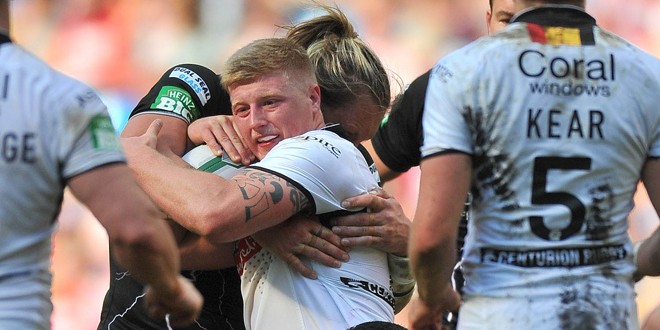 In a nutshell
Huddersfield Giants got their campaign back on track with a dominant performance over West Yorkshire rivals Bradford, who struggled to contain the Giants’ powerful and pacey backs.

How it unfolded
First half: In blustery conditions, Bradford fumble the kick-off and let the Giants in immediately, Scott Grix crossing to make it 4-0; the home side hit back eight minutes later, Luke George setting the platform for Adam Henry to score, with Jamie Foster’s kick making it 6-4; former Bull Joe Wardle puts Giants in front again before Michael Lawrence scores second try in two minutes to make it 6-14; despite looking like throwing a forward pass, the Giants go over again through Scott Grix, and in similar fashion to before get another score just two minutes later courtesy of Luke Robinson, two Danny Brough goals makes it 26-6; another controversial try – Jason Chan goes over after picking up a ball that team-mate Michael Lawrence looked like he’d knocked on, that made the score 6-32 at half-time.

Second half: Bulls start second half perfectly, a deft Gale kick allowing Henry to score again; Ukuma Ta’ai responds less than 10 minutes later, though, to restore the Giants’ 26-point cushion; Joe Wardle bags another four-pointer three minutes later before Jermaine McGillvary adds the Giants’ ninth try with 20 minutes left to go, 48-12; Bulls not giving up, though, and young talent Adam O’Brien crosses thanks to a quick-tap penalty, now 48-18 thanks to Jamie Foster’s boot; Bulls fail to contain Giants yet again, allowing Ukuma Ta’ai to add his second try; two minutes later, England second-rower Brett Ferres pounces on a loose ball to improve the Giants’ lead, just three minutes prior to Jermain McGillvary adding his second of the match to make it 18-66, the score it would ultimately finish.

For an in-depth report, stats, interviews, opinion and insight on this match, buy Monday’s League Express. Available at midnight online or in all good newsagents in the morning.