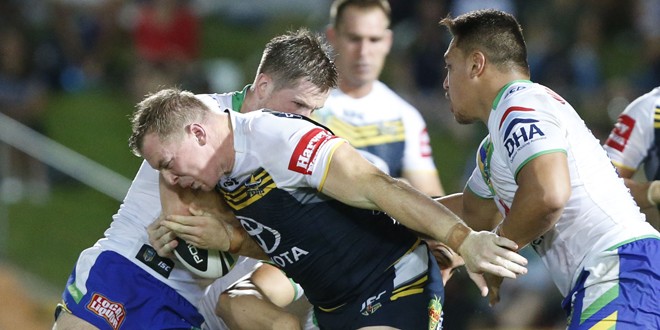 In a nutshell
A late Andrew McCullough try consigns North Queensland to defeat, as the Brisbane Broncos get a precious win to back up their victory in Round One.

How it unfolded
First half: Matt Gillett manages to dance away from some North Queensland defenders to dart his way over, crashing in under the sticks. Corey Parker converts, and the Broncos take an early lead. However, Johnathan Thurston leveled things up eight minutes later, showing great support to dive over and tie the game. The home side do take a lead into the interval though, as Daniel Vidot collects a kick to go over in the corner. Parker misses with the conversion, leaving it at 10-6 at the break.

Second half: It doesn’t take long for the Cowboys to level up proceedings once again; a Gavin Cooper try combined with a missed conversion from Thurston sees the game finely poised at 10-10. A Thurston penalty then nudged the Cows in front for the first time in the match, and they look set to record a precious win. However, Andrew McCullough goes over with just six minutes left, Parker nails the goal and Brisbane cling on.