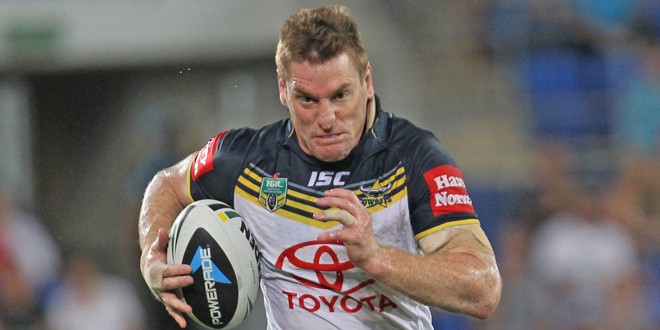 In a nutshell
In a scrappy encounter, Gold Coast Titans did just enough to see off their Queensland rivals and secure two valuable points.

As it happened
9′ – Cowboys strike first through Golden Boot holder Johnathan Thurston, who crosses after Brent Tate bats back a kick. The Australian half-back then converts: 6-0.

16′ – Titans have a try ruled out by the video referee (obstruction).

26′ – Titans denied by video review yet again, just moments after a snake is discovered in the in-goal area.

45′ – Gold Coast finally go over under the posts through Kevin Gordon, who scores from a spilled bomb. Converted by Bird: 6-6.

47′ – Cowboys look to have hit back instantly, but Brent Tate is revealed to have stepped a toe in touch on his way to the line.

67′ – Titans go over again through David Mead, who pounces on a grubber that Kyle Feldt couldn’t deal with. Bird converts: 12-6.

79′ – Titans keep Cowboys at arm’s length until Matt Scott goes over as the hooter sounded. It’s too little too late but a superb try nonetheless. Thurston converts to see the Cowboys go down by one: 13-12.