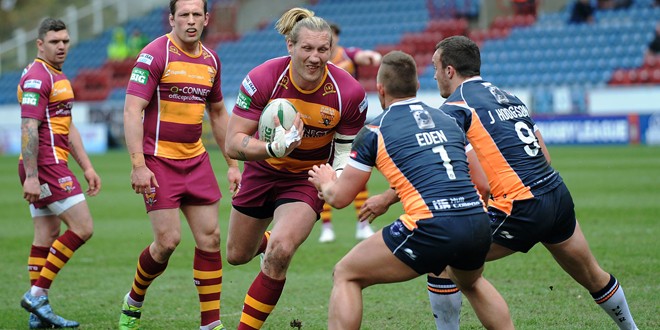 Hull KR scored 18 unanswered points in the second half to salvage a point away at Huddersfield.

The story of the game

First half
Danny Brough scores the first try of the afternoon after supporting a Jermaine McGillvary break and selling a dummy; Robinson adds another four-pointer three minutes later, a Brough conversion making the score 10-0; tensions boil over and a 13-on-13 brawl erupts; Chan and Poore head for the sin bin; two minutes later, Kris Welham is held down after intercepting a pass and Wardle goes off too, Giants down to 11 men; Robins fail to make numerical advantage count and concede again (Wood); Jamie Langley goes off on a stretcher but is seen walking on sideline; Rovers score when Wardle returns from bin through Caro; Burns goal makes it 16-6, but Robinson grabs second moments before whistle to make it 24-6 at the break.

Second half
Robins start brighter and score within four minutes, Cox crossing next to the posts with Burns adding the two; Giants pile on the pressure, force GLDO and fluff a chance before Ferres has a score ruled out for offside; Giants withstand several consecutive sets and eventually crumble, Eden’s bomb is spilled by Grix and Hodgson goes over; Burns converts and it’s 24-18 with 90 seconds to go; Caro crashes over again in the dying seconds thanks to an Eden break down the right, Burns’ kick to draw from the touchline is successful and we have a draw.