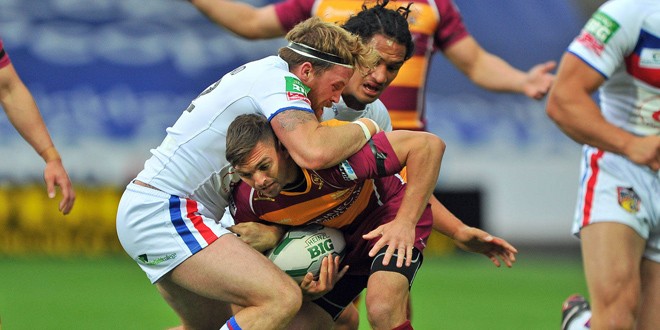 In a nutshell
The Giants gained their first home victory in Super League this season with a comfortable victory against the Wildcats, whose losing run continues.

The Giants took the lead after seven minutes with a try by Jodie Broughton, converted by Brough, but the Wildcats were level nine minutes later when Jarrod Sammut converted his own try after good work by Harry Sijeka.

Michael Lawrence then scored another converted try for the Giants, but Lucas Walshaw was able to reply for the Wildcats, although Sammut couldn’t add the conversion.

But then the Giants took a 24-10 stranglehold on the game at half-time when Ukama Ta’ai pounced on a loose ball to score, and Leroy Cudjoe intercepted to race 50 metres to touch down, with Brough converting both tries.

But the Giants were the last to score when Shaun Lunt managed to touch the ball down in a melee of defenders to make the final score 36-16 in front of 5,487 spectators.